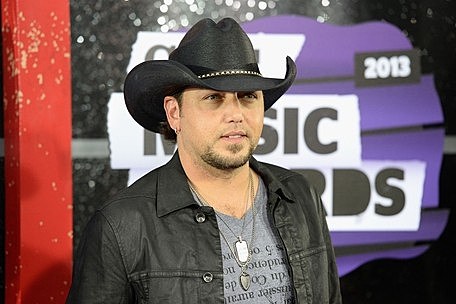 Jason Aldean won the 2013 CMT Music Award for Collaborative Video of the Year, along with his good friends Luke Bryan and Eric Church, for his song 'The Only Way I Know,' from his 'Night Train' CD.

"Thank you guys so much," Aldean said from the stage. "I have to thank, first of all, Eric and Luke Bryan, who is not here tonight, but I know would be up here stumbling around on his words for about five minutes trying to thank everybody and probably crying and stuff. But thank you guys so much. My producer, Michael Knox, for cutting a great record, Broken Bow Records, Capitol Records, EMI, everybody that was a part of this thing, and country radio and CMT."

Church added, "I just want to thank Jason for letting us do it -- CMT, the fans, and Luke, wherever the hell he is."

Bryan was close by, wrapping up a performance of 'Crash My Party,' at The Stage for fans who were unable to attend the CMT Music Awards.

Aldean will continue his Night Train tour this summer, which includes two sold-out shows at Boston's Fenway Park. See all of his upcoming shows here.