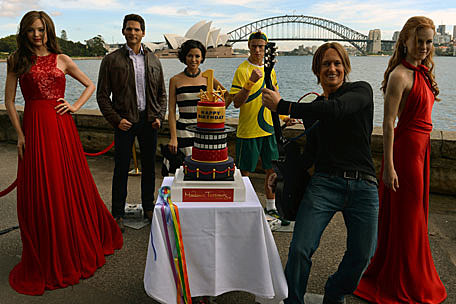 Keith Urban celebrated a special anniversary this week. Or at least, his wax statue, which has spent the first year of its life at Madame Tussauds Sydney, did in front of the city's famous Opera House and Harbour Bridge. Keith's likeness, as well as that of his wife Nicole Kidman, and other famous Aussies -- singer Dannii Minogue, model Miranda Kerr, actor Eric Bana and tennis pro Lleyton Hewitt -- posed with fans and even had a cake made to honor the museum's first anniversary Down Under.

In honor of Record Store Day 2013, Warner Bros. is releasing a 7" vinyl record of two Randy Travis collaborations with the Avett Brothers. The recordings of "February Seven" and "Three Wooden Crosses" were borne from the country legend's pairing with the folk singers for "CMT Crossroads" last November.

The Band Perry want to visit your hometown. As the face of Outnumber Hunger's Feeding America campaign -- which secures meals for those struggling with hunger -- the trio is asking fans how they make a difference. The siblings will then visit one fan's local Feeding America food bank, touring the facility with the winner, have lunch with him or her, and more. Learn how to enter here.

Gary Allan, Luke Bryan, Eric Church, Dustin Lynch, Sheryl Crow, Amy Grant and Jonathan Cain will be on hand when "best sellers" (popular recording artists) meet "best cellars" (some of the top wine collectors in the U.S.) The 14th Annual Nashville Best Cellars Dinner, Monday, April 29, at the Bridge Building in downtown Music City is a wine-and-food celebration to benefit the T.J. Martell Foundation and its funding of life-saving cancer research at Vanderbilt-Ingram Cancer Center. Created by Nashville wine enthusiast and music executive Billy Ray Hearn in 1999, the Best Cellars Dinner has since raised more than $1.65 million to support the foundation's mission to fund leukemia, cancer and AIDS research. Click here for ticket information and details.

RaeLynn, a former contestant on "The Voice," is the first writer signed to a joint publishing venture between Big Machine Music and Prescription Songs. The 18-year-old is currently writing songs for her upcoming debut country album on Republic Nashville, a sister company to Big Machine Music. The new publishing partnership allows the companies to find more opportunities and collaborations for artists who cross musical genres.

The Toby Keith & Friends Golf Classic celebrates its 10th anniversary May 10-11, with more celebrity golfers joining the lineup and morning and afternoon shotgun starts for the first time in the history of the event. The golf classic benefits OK Kids Korral, a cost-free home-away-from-home for pediatric cancer patients, founded by the country superstar. Information about the golf tournament or other ways to help build OK Kids Korral, can be found here.

The 2nd Annual Celebrity Sporting Clay Pro-Am is set for Tuesday, June 4 at the Nashville Gun Club. Proceeds from the event benefit the Tug McGraw Foundation and its efforts to improve the lives of military service members affected by Post-Traumatic Stress Disorder (PTSD) and Traumatic Brain Injury (TBI). Celebrities from both the music and professional sporting clay communities will compete in the event. Kix Brooks joins an all-star lineup of country artists who will be announced in the coming weeks. Late baseball great Tug McGraw was the father of country superstar Tim McGraw. For more information, click here.

Did someone unexpectedly buy your groceries this week? It could have the Farm! In honor of the trio's song "Be Grateful," they took it upon themselves to make the day of several New Yorkers a little bit brighter by treating select folks to groceries. See the group's "random acts of kindness" here. [WGNA Radio]

Watch Our Interview With The Band Perry