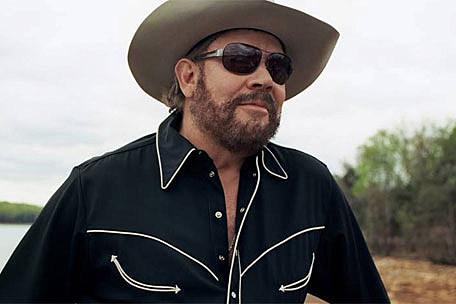 While many listeners will be drawn to the more politically-charged songs Hank Williams Jr. delivers on his new album Old School, New Rules, that could mean missing out on some of the coolest and most important tunes on the lyrically and musically diverse project.

"Old School," for instance, tells Hank Jr.'s history and helps fans old and new put into perspective how a young man living in the home of the legendary Hank Williams grew up. When he sings, "I remember a young Johnny Cash waiting in the wings, 'cause he'd hand me his cigarette when he'd go out to sing," there are few in Nashville who can deliver that line with the ring of truth Bocephus can.

Later in the same song, when he mentions Dolly Parton, Hank also speaks from experience. He recalls meeting her when she was just a teenager first coming to Nashville.

"I remember how people were falling all over themselves to meet her," Hank Jr. tells The Boot. "I'm playing four or five instruments on there, and that's real special to me, too, just like when I was a teenager at Overton High School doing my Rockin' Randall thing. People don't realize that little Rockin' Randall used to step on his Boswell Harley Davidson at 2131 Elm Hill Pike and ride over to Earl Scruggs' house for is banjo lessons, and then go over to Johnny's and talk Civil War history. The bottom line is, between Sonny Osborne and Earl Scruggs, I better know how to play banjo. I had the greatest teachers in the world."

Another unique advantage Hank Jr. had was witnessing the steady stream of famous friends who would visit the Williams' home.

"I never knew who was going to show up," he notes. "Jerry Lee Lewis, I can see him at the piano, tellin' Mama, 'I'm gonna show this boy how it's done right.' He taught me to play boogie woogie piano. I was just a little kid. Let's face it, Hank Williams' home, everybody was there; Ray Charles ... drop any name you want. And I'm watching all this stuff. That's where it came from."

Hank's interest in the Civil War has remained strong, and is one of the connections that brought Brad Paisley to the table to duet on "I'm Gonna Get Drunk and Play Hank Williams."

"He's got some land outside of Nashville, and I dig up Civil War things all the time," Hank explains. "I started doing that at Mom and Dad's house on Franklin Road. I know he's got a great place to find Civil War relics, and we'd done a couple TV things together, so I decided to call him. It was just wonderful. He stayed at the studio about four hours and he just put his heart into it. Brad was definitely the right choice." 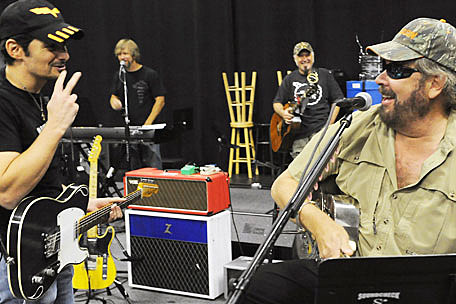 The two haven't actually gone out to search for Civil War relics yet. "He's gone all the time. He works too much," Hank says. "It's on our list. I told him to call me. Me and Eric Church went out there below Charlotte and found bullets and belt buckles. It's a good hobby to have."

Brad will no doubt call on Hank Jr. because he has nothing but praise for the legendary entertainer. "I count as one of my greatest blessings in this career being able to get to know Hank," says Brad. "When I heard the song, I said, 'This is perfect'. It's such a great tribute to his dad. The idea that two of us from this generation are getting together to forget a woman with the music of his father is too much fun. It's a highlight for me!"

The new album has caught the attention of the American public because of Hank's outspoken political views and because many of the songs hit home with folks who are out of work or who have had to deal with downsizing at their places of employment -- and consequently at home. Tunes such as "We Don't Apologize for America," "Takin' Back the Country," "Who's Gonna Take Care of Number One" and "The Change" are pure Hank, taking a hard look at where the country is and where he thinks it should be.

After referencing Merle Haggard's classic, "The Fightin' Side of Me," in "We Don't Apologize for America," Hank gave Merle a copy of the song and soon found the country icon sharing vocals with him on it.

"The next day he called and said, 'I want to thank you for using my song in there.' I told him I just had to. In 1966 my mother (Audrey Williams) tried to persuade him to book us on his show."

The song, according to Hank, took him four minutes to write and has become one of his favorites on the album, with a message that's important to him.

"We don't need to apologize for saving the world, for all the young men that died at D Day," says the singer. "Don't even get me started! I played it for a man that won the Congressional Medal of Honor in Afghanistan and he said, "You know, there are 30 million U.S. service personnel and every one of them are going to want to buy this when they hear it.'"

"Takin' Back the Country" features a sampling of his dad's music and addresses the infamous "Monday Night Football" incident.

"I was singing, 'I'll go find a network that wants to treat me right, y'all can take the change and stick it outta sight, don't tread on me ...' and I thought, 'Wow, that would fit to my daddy's tune to 'Mind Your Own Business.' Before I knew it, I had seven new verses to what was probably the first rockabilly song of all time. It's like a religious experience when [Hank Sr.'s voice] comes in. It took me about ten minutes to write that song."

Hank says fans are responding to "Who's Taking Care of Number One," a tune with a blues vibe that features an appearance by his alter-ego, Thunderhead Hawkins and asks the question: In a country that is sending money and jobs outside the country while American citizens are forced to take extra weeks of unemployment checks and go on food stamps, who's taking care of me?

"I'm a mouthpiece for grandmothers who lost everything. I'm speaking for them. There was an 11-year-old who wrote in and said her parents told her I was a good role model and could she have an autographed picture? It's been snowballing since 'Keep the Change' was released as a single. We have sold several-hundred-thousand dollars worth of T-shirts that say 'Take Back Our Country" on them. It's snowballing. This is not a Southern thing; this is the whole United States country thing."

The musical journey of Old School, New Rules takes listeners through hard country, rockin' country and a little blues mixed in for good measure. "Cow Turd Blues" features a line sung by Trace Adkins, while "Stock Market Blues" and "3 Day Trip" showcase a bit of Hank Jr. humor. The singer puts a Waylon Jennings-esque twist on his daddy's song, "You Win Again" and he adds a swampy, Tony Joe White-inspired feel to "That Ain't Good."

Hank rounds out the album with Merle Haggard's "I Think I'll Just Stay Here and Drink" and explains how it became a duet. "We had already done the song, so it was gonna be on there anyway. Then we find out that Merle is in town, so we called and he came in the studio. That put the icing on the chocolate!"

Hank says he was motivated while writing songs for the new CD. "The people, the fans, the public have inspired me and I guess that's why I wrote ten-and-a-half songs on there," he explains. "I have to say this ride since October that the American public has taken me on is most special of my entire life."