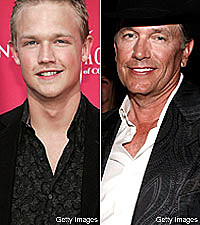 Blaine Larsen has just hit the radio airwaves with his own single, 'Chillin',' and he is also on the country charts with George Strait's 'I Gotta Get to You,' which he had a hand in writing.

"It was one of those songs that just fell out of the sky," Blaine tells The Boot. "I wrote it with two other guys -- Jim Lauderdale and Jimmy Ritchey, who also produces my records. We went over to Jimmy's house to write this song, and we're sitting around his kitchen table, where he's written a bunch of hits already. And he had the title and the guitar lick, and we sat down to write it. I think we wrote it in two hours, including lunch."

The song was played for George's producer, Tony Brown, who then passed it on to the legendary performer. Blaine says he was overwhelmed when he found out George decided he wanted the song for his latest album. "It's the most incredible thing that has ever happened to me, period, really in my career," gushes the Washington state native. "In Nashville, everybody wants to have George record their song. He's the guy. He's the King. And there's nothing that beats it. Everything else is second tier to him. Especially at 24 years old, I'm a very blessed guy and very thankful. I'm just living it up. It's one of those things that you never know if it'll ever happen again. I'm just enjoying every minute ... I can't wait to talk to George about it some day."

The young singer-songwriter will most likely perform both songs when he hits the Chevy Stage during this year's CMA Musical Festival in Nashville on Thursday, June 10.