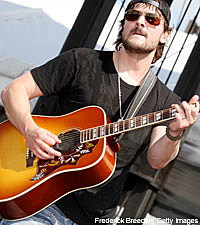 Eric Church wants to keep his songs honest, even if that means some will hang the 'Outlaw Country' and 'Rebel' monikers on him.

That happened almost as soon as Eric released his 2009 album, 'Carolina,' as the song 'Lotta Boot Left to Fill' gained airplay with its lyrics: "Get ups, gimmicks / One hit wonders that don't stick / Pretty boys acting tough/boy bands give it up / and if it looks good on TV / It'll look good on CD / Shape it up, trim it down / who gives a damn 'bout how it sounds / I don't think Waylon done it that way / And if he was here he'd say Hoss, neither did Hank / I ain't dogging what you're doing / But boys come on let's get real / You still gotta lot of boot to fill."

"It's an honest song," the North Carolina native tells The Boot. "A lot of people in this town didn't want me to cut that song. It rubbed some people the wrong way."

Even though 'Carolina' was released almost a year ago, the controversy surrounding this song has yet to die. While the tune pokes fun at a lot of people in the industry, Eric says it is not a self-righteous statement. Those that listen to the lyrics will find that he pokes fun at himself in the song, too. After all, by mentioning Waylon Jennings, Johnny Cash, and Hank Williams in the song, he is guilty of the actions for which he criticizes others.

"It's supposed to be a little comical," he says. "I know [country] music has to evolve or it will die."

Still, Eric says it's important for country artists to be true to themselves and not try to hitch a fast ride to success by adopting ready-made commercial images or riding on others' successes.

So do these views make Eric an outlaw?

"I'm not trying to be that ... Maybe," he answers. "Maybe it would have been better politically if I'd done a different song. I'm just as fine with people passionately hating me as I would be if they were passionately loving me. At least I'm getting to them."