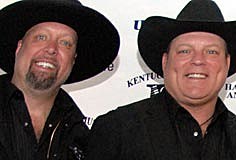 Well, this has certainly been a long time coming! Eddie Montgomery, of the award-winning duo Montgomery Gentry, is hitting the studio with his hitmaking younger brother, John Michael Montgomery, to record a new set of tunes that the siblings promise will be reminiscent of their early years.

"Maybe we'll do two or three songs first and then maybe even do a whole album next year or something," John Michael reveals to Billboard magazine. "We used to do a lot of Willie [Nelson] and Waylon [Jennings] stuff together -- he'd do Willie and I'd do Waylon, stuff like that. We've been wanting to do something together for quite awhile, but we've never really gotten together and done actual songs of our own together. So it's going to be interesting to go in and find what we can come out with."

Rest assured, Montgomery Gentry, who signed to Average Joe Entertainment earlier this year after leaving their long-time label home, Columbia Records, have no plans of disbanding. This is a side project for the Montgomery brothers and a chance to relive some of their favorite childhood memories through song.

"We want to have fun with it more than anything," John Michael notes. "Before, we were on different major labels, different booking agencies. Now all the red tape has disappeared, and the politics, too. It could turn out to be a pretty good album."

A new set of songs isn't the only thing the brothers are collaborating on. They're also recounting their musical journey on the way to stardom in the form of a joint autobiography. "[It's] about our life, being raised in Kentucky with a musical family and moving a bunch from house to house ... and having a good time doing it," the 'I Can Love You Like That' singer explains. "The next thing you know, I ended up getting a record deal and having some hits, and so did [Eddie]. It's rare enough that one person gets an opportunity like that; it's even more rare that two people have something like that happen, and even rarer that two brothers actually have success like me and him have. We have a lot of really good stories, I can tell you that."

John Michael, who completed a successful stint in rehab to overcome anxiety attacks and a sleep disorder, is also hitting the studio later this year to focus on a new solo album of live music, which will also include a DVD documentary with his explanation of each of the tunes. "I'm putting together little, short stories about how each song came about and how it ended up in my lap or how I ended up writing it and stuff like that," notes the 46-year-old. "I gives a little insider stuff that people probably don't know. I think they'll really enjoy hearing those stories."

The singer-songwriter is hitting the road this summer for a series of shows, including several stops in Canada this week. See his tour itinerary here.