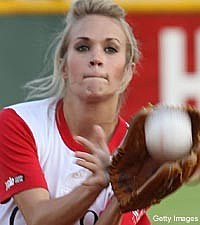 Country music's heavy hitters are getting set to take the field at next week's City of Hope 20th Annual Celebrity Softball Challenge. The rival teams, Grand Ole Opry and 'After MidNite With Blair Garner,' will face off on June 7, beginning at 7:00 PM CT at Nashville's Greer Stadium. Tickets are $20 each and are available at Ticketmaster. Among the players are a couple of former lovebirds (who have both done some 'Dancing With the Stars') and the four members of a popular group who are splitting in half (temporarily) to play on opposing sides!

In the 20 years since the Celebrity Softball Challenge began in Nashville, the star-studded event has raised over $2 million for City of Hope, a leading research, education and treatment center for cancer and other life-threatening diseases.

Fans who can't attend the game can still support City of Hope by visiting www.auctionsforhope.org to bid immediately following the event on several one-of-a kind collectibles signed by country's hottest stars, sports celebrities and more. For those who have been dedicated to recent flood relief efforts in Nashville, City of Hope is donating 200 game-day tickets to the American Red Cross.