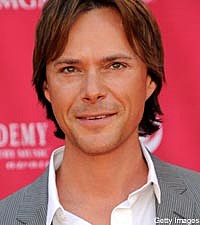 There are self-help groups to deal with human weakness in many forms, including alcoholism, sex addiction, drug dependency and obesity, but singer Bryan White believes he might be on to another group that could attract some new members: RRA (Road Rage Anonymous) for all those crazy, impatient drivers out there. Bryan says he's experienced a touch of road rage, but manages to keep himself in check.

"There are several things that get under my skin big-time," Bryan tells The Boot. "It's reckless driving. When I see somebody going down the Interstate at an ungodly speed, my first thought is: that person thinks they're the only person on the Interstate -- it's all about them! They don't realize that there's kids in some of these cars. They're just blazing through, no signals or anything. That just brings out the bad guy in me."

"In our neighborhood," he continues, "there are kids that blaze up and down our street really, really fast ... not just kind of fast, but so fast that you see them go by, and you [think], 'Are you kidding me?! I want to talk to our board in our neighborhood and get speed bumps. It totally ticks me off!"

As far as road rage, Bryan admits that the one time he did something, he actually posted it to his Twitter account because he was, as he puts it "so ticked off."

"I dropped my son off at school, and I was still in the school zone," he recalls, "and this dude -- who was about 40 years old -- was behind me weaving doing S's behind me and right on my tail. It's a 15 mile-per-hour zone. This guy was dying to go fast. I got so mad that I slammed on my breaks, and he almost hit the back of my car. But I kind of didn't care. I wanted him to be put in his place, even at the cost of losing my bumper. It slowed him down. It's like he had a slap in the face."