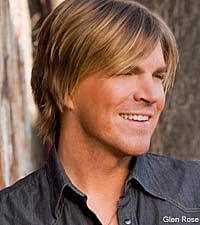 The lineup for this year's Golf & Guitars celebrity pro-am golf tournament has been announced, and once again, it is star-studded! Jack Ingram, Justin Moore, Chris Young, Love and Theft, Mark Wills, Josh Gracin, Radney Foster, Emily West, John Berry, Bryan White, Bomshel, One Flew South and Jonathan Singleton & The Grove have all been confirmed to participate, with Jack also serving as the show's host. More artists are expected to be added closer to the event, which is set for May 18 at the legendary Alister MacKenzie Golf Course at Haggin Oaks in Sacramento, Calif.

The annual Golf & Guitars tournament and concert raises money for two key children's charities in Sacramento, Calif. Each golfer participating in the event gets to play with one of the celebrities and scores a seat next to the stage where the artists perform after the tournament.

This year's event will include a celebrity golf tournament, silent auction and concert. The festivities start with the morning tournament where participants enjoy a round of golf with one of the artists or sports celebrity. The evening gets topped off with the performances by all of the artists, which lasts close to four hours.

Tickets to the concert are $25. For more information or to purchase tickets, click here.