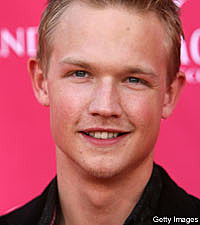 Blaine Larsen is currently back on the country singles chart not once, but twice! His latest single, 'Chillin'' is climbing the Top 40, but his name can also be found within the Top 5 this week. Blaine, along with his producer, Jimmy Ritchey, and prolific songwriter Jim Lauderdale, are celebrating the success of George Strait's latest hit, 'I Gotta Get to You,' which the three of them wrote in 2008.

Blaine says the day he heard it was going to be recorded by King George, he was beside himself. "I was driving up near the airport in Nashville in my old truck," Blaine tells The Boot. "I remember getting the call from Jimmy Ritchey who had heard from Eddie Bayers down in Key West, Fla., that George was recording our song. Eddie was the drummer on the session. They called up Jimmy and said, 'Hey, we're doing your song right now!' That was pretty dang cool. I remember pulling over and just crying like a little baby! I was so excited about it because that's a big deal to get George to record a song. I'll never forget that time."

The 24-year-old singer says he will also never forget where he was and what he was doing when he received the call that George would be releasing 'I Gotta Get to You' as a single. "I was up in Des Moines, Iowa, having breakfast," Blaine recalls. "I had just done a three-hour morning show with Andy and Lindsay in the Morning on [country radio station] The Hawk in Des Moines. Andy has always been a big supporter of mine. We went out after the show to this really great breakfast place. We were having a big ole plate of breakfast, and same thing, Jimmy called me up and said, 'Well, I just got the news that it's a single!' You never forget those kind of phone calls. Jimmy calling is a good thing!"

Blaine will have to wait another week to see if Jimmy will be calling him to tell them 'I Gotta Get to You' is No. 1. This week the song sits at No. 2 behind Miranda Lambert's chart-topping, 'The House That Built Me.'