Joey+Rory's Rory Feek has been writing songs for a long time, so he certainly knows from experience that, for whatever reason, sometimes certain tunes just don't click with particular artists. Take, for example, his recent CMA-nominated hit for Easton Corbin, 'A Little More Country Than That.' The song was actually written for another singer, but was shelved until producer Carson Chamberlain heard it and dusted it off for Easton's debut album.

"When we wrote 'A Little More Country Than That,' we thought it was great ... but we have that feeling about a lot of songs," Rory tells The Boot. "We actually wrote it for Blaine Larsen, and he didn't cut it. We were producing Blaine's record and we thought it was great, but his label apparently didn't think it was great. Then, Carson Chamberlain heard the song and liked it for Easton."

Luckily for Rory and his wife/singing partner, Joey, they're able to mine some of the overlooked gems that they've written and other artists have passed on for their own album projects, like the title track of their new CD, 'Album Number 2.' 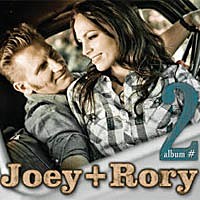 "That song, the title track, I wrote five or six years ago for Blaine," Rory explains. "He was surrounded by people who were trying to change him, as is everybody when they're in that situation. Little did we know that five years later we'd have a second album coming out ourselves. It was Joey's idea that all the lines pertain to us all these years later and we should cut it."

Joey+Rory are currently on tour around the country with one of their heroes, Don Williams. They recently performed at Don's Nashville induction ceremony into the Country Music Hall of Fame. A complete list of Joey + Rory tour dates and cities may be found here.