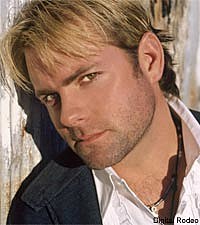 Andy Griggs had a full house -- of friends and fans, that is -- at his second annual Texas Hold 'Em poker tournament and concert held Thursday afternoon, June 10, at Cadillac Ranch during the CMA Music Festival. Bo Bice, Buddy Jewell, Gary Morris, Jason Meadows, Jeremy McComb, Jason Sturgeon and others put on their best poker faces and took to the tables to help support the St. Jude Childrens Research Hospital, and though some busted early in the game, everyone came away with a lot of laughs and the satisfaction of helping out kids in need.

"We've been looking forward to this all year," Andy tells The Boot. "Last year's turnout was really good for the first one, and this year it's even better having the Texas Hold 'Em tournament and having all the guys and girls come out and seeing who has a good game or who stinks! It's always a lot of fun. But I only invite people that can't play. There's not a person in here who even knows what a full house is."

Andy has become quite an accomplished poker player in the last year or two, and has even participated in some major professional games. "I'll play in several tournaments this year. We're heading out to Tunica in three weeks and that's the one leading towards the world series of poker, so we'll see. I have fun with it but I don't want to take it past that level."

Buddy Jewell also had plenty of fun during the tournament, but he's the first to admit that he's not a big poker player. "I'm real good at that Texas Holdout," says Buddy with a laugh. "I played poker one time two years ago at a benefit for the TJ Martell Foundation, and Charley Pride cheats, that's all I can tell you! So I hope Charley's not playing today, because he cheats!"

Artist Matt Gary came out on top at this year's tourney, but the big winner, of course, are the children of St. Jude.