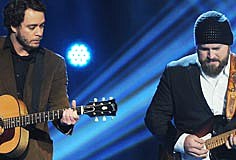 Last week at the CMA Music Festival's Thursday night LP Field show, the Zac Brown Band got a little help from their friends, including Randy Travis, Alan Jackson and Amos Lee, whom Zac declared to be "one of my favorite voices." Amos joined the group to perform their No. 1 hit, 'Colder Weather.'

"It was awesome. I'm not into cold weather, I like warm weather," Amos joked with The Boot. "I had a girlfriend who lived in Colorado; it is very cold. [laughs] I played that song with them one other time at the CMT Artist of the Year special, so I knew it pretty well. We only had to rehearse it twice."

We have the Peach State to thank for this collaboration. "I'd been playing in Atlanta for a while, and they had come to a couple of the shows at the Variety Playhouse down there," Amos recalls. "I met one of his band members at this after hours club after one of the shows. Then, I met Zac through music. He was doing the CMT Artist of the Year thing and asked me to sing that song with them. I obliged and felt good about it. I really like the song and really love what Zac and his band and his whole crew of folks are doing. I support them fully."

However, their friendship will have to stick to the stage for now. "We're so busy! It's hard to hang out when everybody is running around," Amos admits. "We're both trying to get out there on the road as much as we can. I'm sure if we had time we'd definitely kick it."

The 'Southern Girl' singer enjoyed his performance at Music Fest, but he also got a kick out of the ZBB's other collaborations. "I'm a huge Randy Travis fan. I love 'Too Gone Too Long' a lot, and I like 'Forever and Ever, Amen,' too. I like a lot of his songs. I've met him before once, and the CMA performance was pretty crazy, so I was just chilling, letting him do his thing. He's super nice. He was one of the first country artists that I ever listened to when I was younger."

Granted, Amos would've liked to have his own four-day pass to the festival. "I'd like to see everybody," he admits. "I was happy to be able to catch Zac's set, since he's a friend of mine. I really find that a lot of the bands who play there are super tight and have incredible production. My band isn't really either of those things [laughs], so I feel like I can learn groups who are operating on a larger scale because their production is so intense."

Amos hits the road next month with Lucinda Williams. Get a full list of his tour dates here.