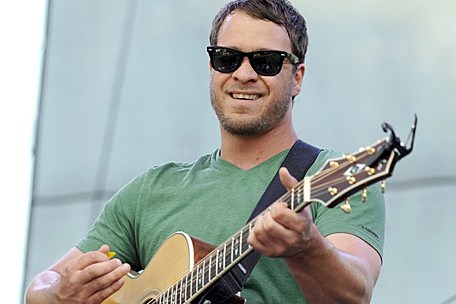 Amos Lee admits that while he may not entirely fit in the country-music genre, he has a great admiration for a number of country acts.

He's good buddies with the Zac Brown Band, having joined them on stage at CMA Music Fest for 'Colder Weather,' and he also hangs with Sugarland. The Boot recently sat down with the singer-songwriter to talk about his current tour with Lucinda Williams, how his appreciation for country music is more than reciprocated and the song of his that's just waiting to be covered.

You have big fans in the Band Perry, did you know that?

Yeah. I met them one time on the 'Ellen DeGeneres Show.' They were really sweet. They're really nice people. I heard them at the show. It was cool. I love when people are coming up and they're working hard and you can see that they're really focused on the process to their music. I really dig that. As a musician, it's nice to see people who really care about the process.

They mentioned to us that they love your tune 'Southern Girl.'

Why doesn't anyone in the country world cover that song for me and help me get paid? What is up? Everybody I talk to says that. I met this guy at Music Fest, Casey James, he said the same thing. If y'all love this song song much, it would kill if you played it at Music Fest! Kenny Chesney does that song or someone like that. I would love that.

What do you think about country music in general?

Country artists have advantages all over the place. The radio support is incredible. The fanbase is rabid, all over. I live in Philadelphia and we went to see Sugarland play there, when they were doing the Kenny Chesney, Lady Antebellum tour. I was knocked out by how crazy that crowd was in Philly for country music. You can't say that about everywhere else. You can't say that any genre is going to do that well regionally. It's incredible with what is happening with country music. It seems to be very visible. There are new ideas for festivals and TV shows. There's a lot of flow of artists as well. Ultimately I think it's the songs that get people.

You must be excited about hitting the road with Lucinda Williams.

Of course I am. Lucinda is one of my favorites. I hope I get to sing some of her songs, that's what I'm more excited about than anything else. I'm also excited about getting on the road and getting to see her band every night, because that's how I learn. When I open up for people, I just check out what they're doing. I've never been a good band leader, to be honest. I mean, I'm OK. I do well, but I'm not a great bandleader. When I'm in my right head space, I'm a great bandleader, but I'm not consistently in a good head space. For me, when I see a guy like Zac Brown, I see a guy who is very centered as a band leader. His band always seem like they're set up, doing their thing. They have a consistent energy. The energy of my band is very good and we do a very beautiful job. I've gotten better. I started out all over the place, but that's how your mind works sometimes.

Which song would you most like to sing with Lucinda?

Almost any of them, really. The one that's been on my mind the most is 'Little Angel, Little Brother.' It's an incredible story, an incredible character. The way she writes and the way she sings it. I would really love to do that with her, but it's her song. Sometimes people don't want to do certain songs for certain reasons. I feel like that's the thing, but I would do almost any of her songs.

She sang on 'Clear Blue Eyes' for your 'Mission Bell' album. Were you in the studio together for that recording?

None of the guest vocalists were actually in the studio with us. There's almost an advantage to not having people in the studio with you. You almost get a clearer vision on what they want to do because you're not telling them anything. Immediately, you get into the studio, you're a guest coming into a foreign environment of people who've already been working on the album for two or three weeks. They're already developed a dynamic and a rapport, and all of the sudden, your energy becomes part of this collective, whereas I like that there is an artistic independence there on the outside. Here she is in a room with her people, thinking about the song in her way. And bringing it back to us.

Is it intimidating to sing with someone like that?

It's not intimidating. Sometimes it is to sing live with people like that. It's not intimidating to send a song, though, because if they don't like it -- we're humans -- we've been rejected time and time again. Being a musician in the public eye, you have to get used to being rejected, it happens a lot. You hope for the best and hope that the people who are artists respond to your artistry.

Speaking of artistry, tell us about the video for your current single, 'Flower.'

It's a pretty funny little video. It wasn't me at all. The video people put it together. I appreciated the story they came up with. The amount of work and effort it takes to create the world that they create is crazy. I really appreciate the amount of creative energy they put into the project for sure. At this point in my career I really feel like that letting go of that kind of thing is the best thing. If I had a clear vision on a video, I would have given it to them. I would have been very adamant about it. But I didn't, so what's the point of me trying to pour over everyone else's ideas?

What inspired the song?

Getting to the bottom of a dark place where you have to make a choice. There are those times when you reach this place and it's like do you seek out a source of renewal or do you delve deeper into a world of destruction. When you're born with a shovel in your hand, you're always going to delve deeper into destruction, but in this particular moment, I sought out renewal and that's what the song is about.

Get a full list of Lucinda's tour dates with Amos Lee here.