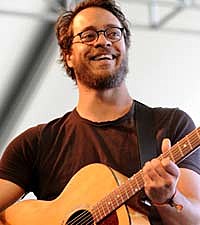 "There's a real searching element to a lot of these songs," says Amos of the album that was produced by Joey Burns of the alt-rock band Calexico and also features guests Sam Beam of Iron & Wine, Priscilla Ahn, Pieta Brown, James Gadson and members of Calexico. "The musicality that [Joey Burns and Calexico's John Convertino] bring is just amazing. It was especially nice to work with John and get a very different texture rhythmically. They're great at creating atmosphere-sonically, they brought a beautiful dimension into a lot of the songs, and helped them to expand and breathe more."

Those who known Amos as a folk musician may be a bit surprised by the array of guest artists from different formats. But Amos says folk is no longer easy to define.

"I don't really know what folk music means anymore," Amos tells About.com. "I definitely hope [my music] means something to people ... I can relate to soul, R&B ... whatever people want to call me is fine. I just hope it makes them feel something."

Amos is on tour debuting some of his new songs. His next concert on September 28 at Hiro Ballroom in New York is sold out but you can catch him October 2 at Farm Aid in Milwaukee, Wisc. For other dates and cities, check here.