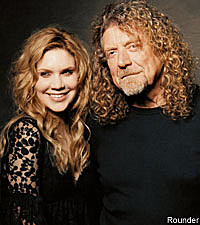 The pairing of bluegrass icon Alison Krauss and rock icon Robert Plant has proved to be a match made in music heaven. Such a great match, in fact, that they're following their 'Raising Sand' duets album with another joint project.

"We've got a whole bunch of songs, and we're just going, 'Does that work, and does that work?'" Plant tells the UK's Absolute Radio. "So we're trying it out again."

Working on new music, the two know they have a tough act to follow. 'Raising Sand' has landed five Grammy nominations, including Album of the Year. Their tour supporting the album sold out in cities across the country, and sales of the CD have topped one million.

"The critical stuff that we've had, the acclaim, it doesn't bode very well for the next record if we get that far, because people really took to it," says Plant. "It was so genuine -- the choice of songs, the production techniques, the engineering ... The whole thing was just a dream. Of course, you don't expect anything because the material isn't kind of mainstream pop particularly. So yes, a real blast, but we have laughed our way around the planet, which is quite special."

"We were just getting into this to have an interesting musical experience," Krauss adds, explaining that she, too, is floored by all of the album's accolades. "And its ended up being a wonderful time for all of us."

So what will the duet partners title their sophomore collaboration? That's a work in progress.

"Last night's title for the next project was called 'A Gated Community,' because it's like being in a looney bin," Plant jokes.

While Krauss holds the record for the most Grammy Award wins by any female solo artist in any genre (21 wins!), Plant only has two Grammy wins -- both for collaborations. He won Best Hard Rock Performance in 1998 for his 'Most High' duet with Jimmy Page and again last year for Best Pop Collaboration for the first single from 'Raising Sand,' 'Gone Gone Gone (Done Moved On).' He's certain to add to his trophy case on Sunday, but Plant isn't too concerned with industry recognition.

"This is the award that I'm most proud of -- working with this woman," he says of Krauss. "You can have a lot of gold stuff and silver stuff and whatever it is, but you end up putting them out of the way. The achievement is really to do something I never imagined and to be schooled into getting it right."