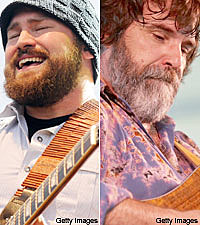 Darrell Scott is a highly-regarded singer and songwriter whose hits for other artists include the Dixie Chicks' 'Long Time Gone' and Sara Evans' 'Born to Fly.' When Zac Brown -- who regards Darrell as one of his musical heroes -- met the man face-to-face, the 'Chicken Fried' singer was, well, a little awkward, to say the least.

"I was starstruck," Zac confesses. Clearly. he had his reasons for feeling that way: "I think he might be the baddest man walking around on the planet as far as singer-songwriter-instrumentalists go."

The tongue-tied singer is a little more relaxed fronting his chart-topping Zac Brown Band. The group's latest single, 'Toes,' is currently resting in the Top 5 on the charts.