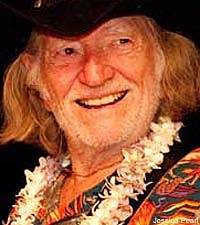 Willie Nelson's annual Independence Day celebration, dubbed the 'Backyard Summer Picnic,' is only days away, and we now know who's hitting the stage with the legendary entertainer.

Willie's star-packed show, held at Austin's Backyard at Bee Cave, will include performances by Jack Ingram, Jamey Johnson, Kris Kristofferson, the Randy Rogers Band, Asleep at the Wheel, Leon Russell, Ray Price, plus a few more guests. The eclectic line-up perfectly fits the reason Willie launched the event years ago. "I started it to bring together different kinds of people, and that's still what we do," he tells Parade magazine. "It's people drinking beer, smoking pot and finding out that they have things in common and don't really hate each other. Music gives people a chance to enjoy something together."

The day-long jam session, held every year since 1972, has played host to several of music's biggest stars over the years, including Jimmy Buffett, the Pointer Sisters and Stevie Ray Vaughn, among others.

With the release of his new CD, 'Country Music,' back in April, Willie has been enjoying another ride up the charts. The CD hit No. 4 on the country album charts, and soared all the way to No. 2 on the Americana chart, ultimately coming in right behind fellow country icon, Merle Haggard.

Willie's jam-packed concert schedule, which still includes about 200 dates a year, can be found here.