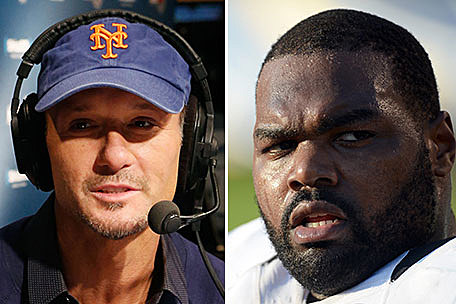 Country music superstar Tim McGraw doesn't want to explicitly share who he's rooting for to win the Super Bowl. But he gave a pretty big hint.

"It would be nice to see Michael win and see that whole 'Blind Side' story come to completion," McGraw says.

He's referring to Baltimore Ravens offensive tackle Michael Oher, whose life was the subject of the film "The Blind Side." It starred McGraw and Sandra Bullock, who won an Oscar for her role.

McGraw, whose new album, "Two Lanes of Freedom," comes out on Tuesday, was in New Orleans on Friday for a very early performance at the House of Blues broadcast live on ABC's "Good Morning America."