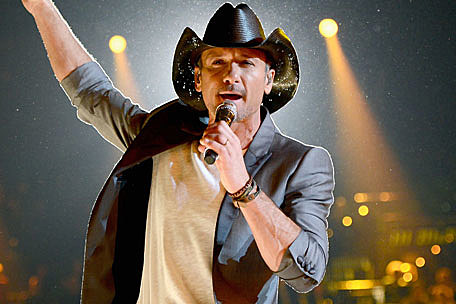 "Hey y'all, want to take a look?" Tim McGraw says gesturing inside a door at Nashville's Bridgestone Arena to a cavernous rehearsal space and the state-of-the-art stage and lighting he'll use on his Two Lanes of Freedom 2013 Tour.

"It's gonna sound smokin'! The band really sounds great," Tim told reporters gathered at the arena. "You'll see some really cool stuff on stage, but for me, it's all about playing the music. We're going to play a lot of new songs."

Presented by Pennzoil, the Two Lanes of Freedom tour kicks off May 2 in Birmingham, Ala., and will continue on to 30 cities through July. "There's a lot of lights and a lot of video going on, but the main thing to me is going out there and setting the speakers on fire with the sound. The band just really sounds great."

Tim says he looks forward to playing songs from his new album, Two Lanes of Freedom, which debuted at No. 1 on Billboard's Top Country Albums chart, marking his 14th No. 1 debut. "We're playing more new songs than we ever have on this tour," he says. "Throughout my career, we've always tried to introduce new material and play new stuff off the album, but this time we've got six or seven off the new album. The thing the fans are going to see that we've been working towards for years now are the little moments that happen between songs musically. That's something we've always tried to do and we've gotten more and more into doing that through years of touring. This year, there are some really cool moments between songs."

Tim was careful not to reveal too much about what he has planned, so as not to ruin the surprises awaiting fans. He plans to perform his current hit single, "Highway Don't Care," which includes vocals from Taylor Swift and Keith Urban on guitar. Both artists' contributions will be heard, but he wouldn't elaborate on exactly how they'll be featured. "You have to come and see it. I can't tell you," he says with a mischievous grin. "I can't tell you all the secrets. You'll hear Taylor for sure, but how you see her is a whole different thing. It's gonna be really cool how we do it. And you'll see some of Keith, too."

Clad in jeans and a long-sleeved white shirt, Tim looked fit and relaxed as he fielded questions, including queries about his workout routine while on the road. "The older you get, the harder it is to stay in shape," he says. "I love doing what I do and I want to do it for a lot longer. I don't ever want to go out on stage when I can't enjoy it, and being fit is something that makes me enjoy it. It makes me add more energy to my show. I try to keep on it every day."

His fitness program seems to be paying off, as Tim was named one of People magazine's most beautiful people. When asked how he feels about the honor, he laughs and says, "Thank God for country music, that's my reaction because I sure wouldn't be picked standing on the street corner. It's a good thing I have a guitar in my hand and am up under the lights."

But he admits, the recognition is appreciated, "It's cool," he says. "Who wouldn't like that?"

Brantley Gilbert and Love and Theft are the opening acts on Tim's Two Lanes of Freedom tour. "I'm a fan. I love their music," he says of Love and Theft. "I love the organicness of their music and the place it comes from. It reminds me of the music I loved growing up."

He's also a big fan of Brantley. "He reminds me of Hank Jr. when Hank Jr. was at his prime and smokin'. He walks out with that kind of swagger and attitude that all artists wish they had."

When asked if his three daughters would be joining him on the road this summer, he smiles and replies, "I guarantee they'll go out as little as possible. Gracie gets her driver's license here in about a week, so she don't want to have anything to do with me right now. She's ready to hit the road. They'll be hanging with friends. They'll come out some. Faith and the kids will come out off and on, but more likely than not they've got their social life to tend to this summer."

In addition to serving up great music on the tour, Tim is also continuing his commitment to the Operation HomeFront program by providing mortgage free homes to wounded military veterans. So far, 30 houses have been awarded to deserving military families and this summer Tim will give away a home at each of his 31 tour stops. "It's a great program," he says. "I couldn't think of anything better to do than give those guys a mortgage free home to live in the rest of their lives."

See a list of cities and dates on Tim McGraw's Two Lanes of Freedom tour here.

Watch Tim McGraw's 'One of Those Nights' Video