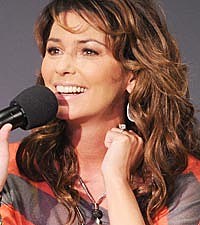 Shania Twain is revealing her first new song in almost six years! A video has surfaced featuring the country megastar rehearsing her new tune, 'Today Is Your Day,' marking the first performance footage of Shania in more than five years. (Watch it below.)

"I wrote this song in real time as the series developed," the songbird tells Perez Hilton, referring to her 'Why Not? With Shania Twain' television show. "I'm mixing the record now, and by the end of the series the song should be released. I'm so excited! I can't believe it!"

Shania's reality/documentary series airs Sundays at 10:00 PM ET on Oprah Winfrey's OWN Network. The series finale is June 12, so if her prediction is correct, that will also be the day that 'Today Is Your Day' hits country radio!

In addition to promoting the show, the singer is also on a whirlwind media tour in support of her new autobiography, 'From This Moment On,' which was released May 3. The book chronicles Shania's struggles from humble beginnings to becoming a pop culture phenomenon with over 75 million records sold. It also tells the heartbreaking story of her now ex-husband's alleged infidelity, which ironically -- and downright magically -- ended with her finding love with the other jilted party in the affair, Frédéric Thiébaud, to whom she is now married.

Click below to watch Shania rehearsing 'Today Is Your Day.' It's her first recorded song since 'Shoes' from the 2005 'Desperate Housewives' soundtrack.