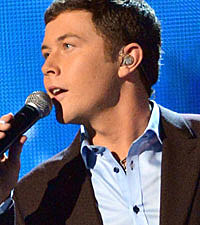 Scotty McCreery was in full holiday mode yesterday in Nashville (Monday, Nov. 5) during the taping of his "Christmas With Scotty McCreery & Friends" special.

Set to premiere on GAC on Saturday, Dec. 1, the special features the 19-year-old performing songs from his just-released Christmas album, including a new holiday tune called "Christmas in Heaven," along with such classics as "Let It Snow!" and "Santa Claus Is Back in Town."

Scotty isn't the only one in a festive mood. He reveals that his mother, who is usually the one to get everyone in the Christmas spirit early by blaring Christmas tunes around the house, started to celebrate even earlier than usual this year, putting the family's Christmas tree up a few weeks before Halloween.

"I think I was on the road when she put it up," says the singer. "I came home and I see the Christmas tree. I mean, it was like mid-October. It was the first time she's ever done it like that, and it was mainly be cause the Christmas CD had come out in October. I can see where she got in the mood early this year, but normally [the tree] doesn't go up until Thanksgiving, or at least afterwards. We ain't that crazy at our house."

Scotty will welcome a number of musical guests to the Christmas special, including Gloriana (performing "O Holy Night" and "Silent Night"), Jana Kramer ("Have Yourself a Merry Little Christmas," "Winter Wonderland") and Brett Eldredge ("Mary, Did You Know," "Jingle Bell Rock").