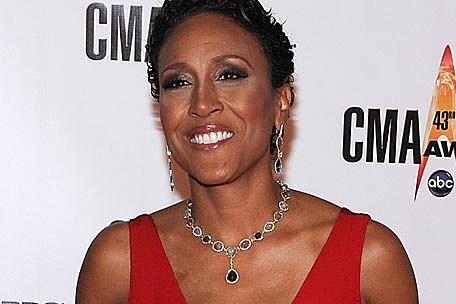 Robin Roberts knows her country. Long before the 'Good Morning America' host was waking up millions of viewers with all of the day's top news, she was spinning country tunes on a Louisiana radio station. She moved to Nashville in the mid-'80s, where she worked as a sports reporter at the local NBC affiliate, also helping out on Country Music Hall of Famer Ralph Emery's show. And all her life, the Mississippi native has been a big fan of the genre.

Robin's very first primetime special was 2009's 'In the Spotlight with Robin Roberts: Bright Lights. Big Stars. All Access Nashville,' which featured candid interviews with Carrie Underwood, Tim McGraw, Loretta Lynn and Martina McBride, among others. This year, the Emmy winner will sit down again with the now newly-married Carrie, along with several other big Nashville names including Brad Paisley, Kellie Pickler, Miranda Lambert and in their first network interview together, LeAnn Rimes and Eddie Cibrian. It's the latter two whom Robin predicts will have people talking around the water cooler after her show, as she tells The Boot the couple might just change people's minds about them with their conversation on 'In the Spotlight With Robin Roberts: All Access Nashville,' which airs November 3 at 10:00 PM ET on ABC.

You have a great track record with getting very reserved stars to open up, namely Carrie Underwood. What's your secret to making her feel comfortable enough to tell you things she's normally private about?

My secret is that she trusts me. There are some things she's said to me that I'd never repeat. Nothing risque or that would make a tabloid ... but she's just comfortable around me. I went home to Oklahoma with her and met her mom and her teachers who were so instrumental in her life. To see where she has come in the last year ... The last time we sat down with her, last year, was the first time she even mentioned his name, Mike Fisher. And they're married now!

She's comfortable in her own skin, and what I really respect about Carrie is that she has stayed the same. It's only been five short years since 'American Idol,' and she doesn't have "yes people" around her. If she's messing up, she trusts [the people around her] to tell her the truth. There are not a lot of celebrities at that level who want those people around them.

We talked a lot about the wedding. She shared pictures with us that she hasn't shared with anyone else. She told us her nickname for Mike ... Now that they're married, she's like, "Nothing to see here! Everybody move along! Yes, he's still in Canada, and I'm still here [in Nashville]. We're working it out. Don't ask me about the baby!" [laughs] No, of course we didn't go there. But all her girlfriends in Oklahoma are having babies now. She's really very much wanting to not be in the spotlight, and she allows me to put her in the spotlight year after year, which I'm very thankful for. 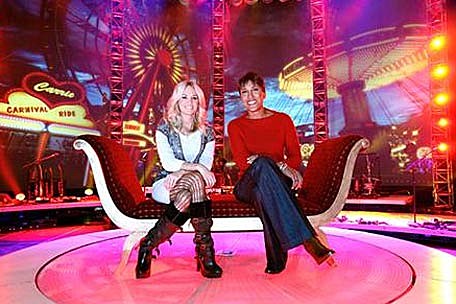 One person who cannot evade the spotlight these days is LeAnn Rimes. What misconceptions does she clear up in your interview?

I really encourage people to have an open mind. I, like a lot of people, read some things ... And as a journalist, you're supposed to go in open minded but, of course, you have some opinions. But I was so glad that I checked those at the door and allowed myself to get to know her. She's refreshingly down to earth and very honest. I read some things to her, and she broke into big, genuine tears, showing remorse for not just the relationship that happened with Eddie, but really deep into her childhood. This is someone who from her early teens has been on the road for the majority of her life. She's trying to figure out who she is outside of the entertainment world. She's doing a lot of growing. I genuinely liked her when I walked away. It caught me by surprise, how I felt about her when I left.

Do you think the press has been unfair to her?

There's no denying that she was married and Eddie was married, and they had an affair. Unfortunately this does happen, and there's no excuse for it and it's not right by any stretch of the imagination, especially when there are children involved. But what I really think took it to another level was the social networking. The media, for the most part, spent so much time on it and got it basically right. But with Twitter and Facebook, people can say whatever they want and not have to back it up with facts. That's when it got pretty out of control.

Brad Paisley is always joking around, but you got him to get serious about a few things ...

It was so much fun to be in his home with Kim, his wife who is so talented. They are one of the most normal married couples you'd ever want to be around. We all know Brad as being the nicest guy in the biz, which is true, but the Nashville floods really affected him. For his tour to be named the H2O Tour and how it happened right before he launched the tour ... he really allowed that emotion to be seen and to be felt.

You take viewers inside the homes of some of the stars on tonight's special. Which houses really 'wowed' you?

Kenny Rogers has a really nice touch. Naomi Judd has something surprising in her closet. But I spent a lot of time with Kellie Pickler. Do you know how hard it was to get her to let us into her home? And that's only because she didn't want people to think that she thinks she's all that and a bag of chips! She's so humble and honest; she didn't want people to feel like she's full of herself. The things in her home are so sweet. Her grandma who was so special to her, she has a space in her bedroom that's a tribute to her grandmother. Her grandfather had just moved in the week before, so he's upstairs. It's a beautiful home, and it's just Kellie. It's eclectic, comfortable, livable ... It's country chic.

What part of this special are people going to be talking about around the water cooler the day after the show airs?

LeAnn and Eddie. Seeing them in their home, seeing how they are with one another. There are a lot of people who are going to be surprised by how they feel about it all after seeing them for themselves.

CBS used to be the network to air the CMA Awards and other country specials, but ABC has taken that over in the past few years. Have the ratings proven that country stars generate big viewer numbers?

Yes! Our special last year and anytime we have country music stars on ['Good Morning America'], they have a rabid following. There's just something about country music ... I like all genres of music, but with country music, it's always been true storytelling. A lot of us are going through difficult times right now, and there's something about the soul of a country song. It makes you feel like anything is possible and things are going to turn around.

Have you been starstruck by any country singers?

Let me tell you, Tim McGraw is all man. He has the scent of a man. He's like a bad little boy! His eyes are always really big ... There's just something about him that is so incredibly masculine. But with Faith [Hill] and the girls, he also lets his sensitive side show. And Kenny Chesney ... I remember when I was going through cancer, and we had him on the show. He sang one of those songs that was like he wrote it for me. I was bawling on the air. I felt so bad because I hugged him and I got my makeup all over his nice, crisp shirt. That's what always gets me, those kind of moments.

'In the Spotlight With Robin Roberts: All Access Nashville' airs November 3 at 10:00 PM ET on ABC.