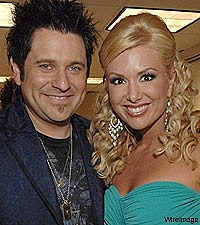 Rascal Flatts' other two members have done it, and now it's Jay DeMarcus' turn to become a father. The Flatts bassist/pianist and his wife, former Miss Tennessee and current CMT personality Allison DeMarcus, are getting ready to welcome their first child in January.

Jay says he is confident that his wife will be a wonderful mother, "because she has done an incredible job raising me over the past six years," he jokes.

"Jay and I are thrilled to let everyone know we are going to be parents!" Allison adds. "We can't wait and are ecstatic to share our news."

"I'm most looking forward to making wonderful memories -- the first days of school, summertime with them, taking them to Disney World. I'm ready to be a father," Jay tells People.

Apparently, the two have been trying to have a baby for a few years, and Jay says it makes the announcement "a little sweeter. When we stopped trying to plan it out and stopped worrying about it, it happened very naturally."

Jay revealed the news to his fellow band mates, lead singer Gary LeVox and guitarist Joe Don Rooney, on a plane Tuesday night following a show, and they celebrated with a bottle of champagne. "Gary told me to hold on cause you're in for the ride of your life," he says. "I'm ready for the challenge."

Flatts lead singer Gary has two daughters, nine-year-old Brittany and six-year-old Brooklyn, while Joe Don and his wife Tiffany are expecting their second child in September. They are already parents to two-year-old son, Jagger.

Allison and Jay tied the knot May 15, 2004, in Nashville. They met after Allison starred in the Flatts' video for 'These Days.' The parents-to-be are also an aunt-and-uncle-to-be, as Allison's sister Amy is also pregnant. Amy, who is married to singer/songwriter James Otto, is expecting a little girl in August.