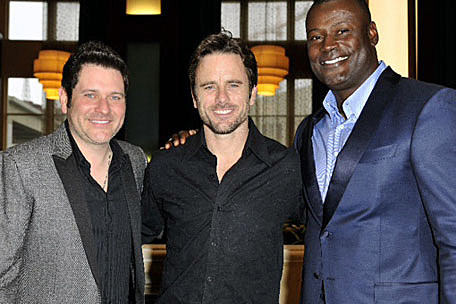 Darius Rucker, Kix Brooks, Kristen Kelly and Chuck Wicks joined football stars Drew Bennett, Jurrell Casey, Ryan Clady, Richard Dent, Brock Osweiller, Golden Tate, George Wilson and Delanie Walker at the Palm in Nashville, where attendees ate surf 'n turf and mixed and mingled with the celebrities, who accepted tips for special requests. Darius brought in $1,000 when he agreed to sing for one patron who wanted to hear his favorite song. The country star sang "Come Fly With Me," to the delight of the room.

Kix, who has done several of the dinners, says Kevin and Jay are two of his favorite people, so when they call he always says yes. "We help each other out with our charity events," the singer tells The Boot. "It's great to be able to use any fame we might have to raise money for a great cause."

Kix went on to say that there have been several kids he has met at his concerts because of the Make-a-Wish Foundation. "I wouldn't get to know them, and they wouldn't have that opportunity if it weren't for Make-a-Wish," he says. "It gives us the opportunity to put a smile on someone's face and it humbles me to be able to be a part of that."

This was the first year for Chuck to take part in the event. "It's something I've always wanted to do, so when the call came this year I saw that I could be in town and I made every effort to be here. It's been awesome."

Darius says giving back was something instilled in him by his mother. "When I was a kid she told me that I should help people. One I was to the point where my name could help people, I started doing different things for charities. I come out here and have fun and raise some money to help Kevin out."

Chip Esten says the town of Nashville has embraced the cast of his television series in such a way that they want to give back when they can. "Plus, we want to experience as much as we can in the music community so we can know what it is really like."

After silent and live auctions for items including bottles of wine from Kix's Arrington Vineyards Winery, a Sonoma Valley WIne Tour, a Kid's Swim Clinic with Olympian Ryan Lochte and tickets to the Sunday final round of the 2014 Masters, the party moved to Honky Tonk Central for a huge jam. Cowboy Troy hosted the jam, kicking it off with "Sharp Dressed Man," "Walk This Way" and "Mary Jane's Last Dance."

Cowboy Troy then called Keith Anderson up to sing a few of his hits, including "Pickin' Wildflowers." Darius entertained with his current single, "Wagon Wheel" and Kristen performed her hit "Ex Old Man." Big & Rich joined Cowboy Troy for a mini-concert featuring country and rap numbers which really had the crowd dancing. Included in their portion of the jam was "Save a Horse (Ride a Cowboy)" and a cover of AC/DC's "All Night Long."

The jam could have gone on all night long if the audience had their say but it did close down a little past midnight, with a group of tired but happy guests heading home, not only having enjoyed a good time but knowing they helped raise more than $100,000 for a great cause.

Flip Through Pictures of Rascal Flatts