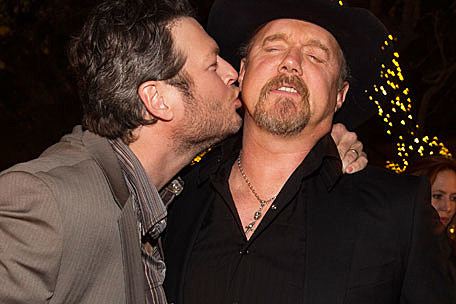 The Boot rounds up today's country headlines from around the web.

Did Taylor Swift and Harry Styles break up? Sources say the young couple ended a romantic trip to the British Virgin Islands early after a big fight. [AOL Music]

If the aforementioned relationship is indeed over, who should the "We Are Never Ever Getting Back Together" singer date next? "Buzz 60" has some hotties on their wish-list of Taylor Swift suitors, including Prince Harry! [AOL On]

Happy birthday to the King! Elvis Presley would've been 78 years old today (Jan. 8). In celebration, our friends at Spinner have collected personal stories from the likes of Tom Petty, Paul McCartney and Brian Wilson about meeting the rock icon in person. [Spinner]

Miranda Lambert is looking lovely on the cover of Redbook magazine's February issue. In the featured interview, the "Over You" singer opens up about her insecurities, her Twitter feud with Chris Brown and why she has to be the "bad guy" sometimes when it comes to fans intruding on date nights with her hubby. [Redbook]

A killer list of performers has been announced for the 2013 Rodeo Houston. The event, set for Feb. 25 through March 17, will include sets by Toby Keith, Gary Allan, Alan Jackson, Zac Brown Band, Mary J Blige, Lady Antebellum, the Band Perry, Blake Shelton and more. [Taste of Country]

Jay DeMarcus' baby boy Dylan looks just like him! The Rascal Flatts member tweeted an adorable picture of the 5-month-old tot over the weekend. [Twitter]

Lauren Alaina loves to experiment with her hair, and her latest 'do seems to add almost "18 Inches"! [Twitter]

Jerrod Niemann went back to college last month to make friends and play a few tunes. The singer-songwriter surprised Arizona State University students and performed in the dorm room of the "Rock Your Room" contestant winner. [Got Country Online]

Taylor Swift, Hunter Hayes and Kelly Clarkson are among the artists featured on the 2013 Grammy Nominees album. Taylor's "We Are Never Ever Getting Back Together," which is up for Record of the Year, "Wanted" from Best New Artist nominee Hunter, and Kelly's "Stronger (What Doesn't Kill You)" -- up for Record and Song of the Year, to name a few -- can all be found on the project, which comes out Jan. 22. [Grammy.com]