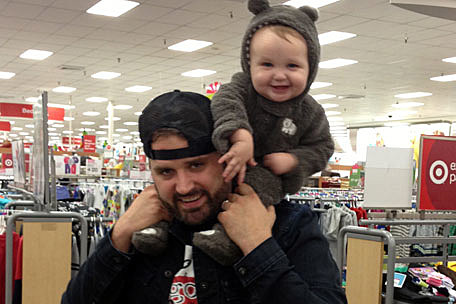 Since becoming a father nearly a year ago, Randy Houser has noticed an effect on his songwriting. The co-writer of Trace Adkins' "Honky Tonk Badonkadonk" and Justin Moore's "Back That Thing Up" promises he hasn't gone soft since the birth of his son West, but there may be some topics now off musical limits.

"There's certain things as a songwriter that I don't really care to write about and there are certain things I won't sing about anymore," Randy tells The Boot. "There are just so many things that I probably thought was OK for me, or have been in the past, that I would never want my son to think was OK. You start checking yourself a little bit and that definitely has affected my songwriting. I'll never be like sippy cup country or write about everything I do around the house. It's not that kind of thing. I'm not Mr. Mom, but there's just certain things I won't say anymore."

While Randy may not want his baby boy taking some of the same paths he did, the singer-songwriter does want to raise West similarly. "I don't think that I could ever be a strict dad," he admits. "I never grew up with anybody strict in my life ... I'm not saying I'm a role model by any means or anything. I think the fact that I wasn't told what not to do all the time -- my spirit kind of told me things that I shouldn't -- I got to develop on my own. It's part of your common sense. Until he just really starts messing up, I'm going to let him have some pretty good freedom. But I will get on his butt if I have to. You have to be a daddy too."

At this point, the worst part of fatherhood (and marriage to wife Jessa) is having to say goodbye when he hits the road. "It's hard every time. We've been touring constantly. For the most part, when we first got married, my wife would get to go with me. When she got pregnant, she went with me for some of the pregnancy, but as soon as it got rough there was just no way."

While numerous artists have their family with them on tour, to say Randy has a few things getting in the way would be an understatement. "There are 10, 11 guys on a bus," he reports. "[Jessa] loves it. Actually, when she goes out with us, she's pretty much one of us. But with West, it's really not conducive to have an 11-month-old on a bus. It's pretty much a circus out there with all the clowns that I have on that bus. He's not quite there yet. Hopefully I'll be able to get another bus soon and they can come with me. That'd be pretty cool."