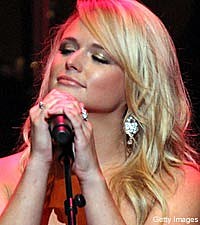 You say you want a 'Revolution'? Miranda Lambert took the stage at Nashville's Ryman Auditorium on Thursday night (Sept. 24) to offer a sold-out crowd just that -- introducing her new album to invited fans, peers and industry VIPs.

"We're gonna start a revolution! Are you with me Nashville?" Miranda asked, receiving a roar of approval from the crowd. Fifty visitors from Texas, including members of Miranda's family, were on hand to witness the debut performance of tunes from the singer-songwriter's third album, with Miranda taking time to talk about a few of her favorites. From the opening notes of 'White Liar' to the closing lines of 'Virginia Bluebell,' the audience remained enthusiastic throughout.

"I promised my band I wouldn't talk very much but I feel like I need to tell you about some of these," Miranda explained. She then paused, adding with obvious delight, "Playing the Ryman is awesome!" Although Miranda's boyfriend, Blake Shelton, was unable to attend, she mentioned him while discussing 'Me and Your Cigarettes,' jokingly saying,"You're in the doghouse again!"

The singer called 'Makin' Plans' "the closest thing I'll ever get to writing a love song," and explained that 'Heart Like Mine' was a song she had to write. "Ashley Monroe and I wrote this one. I grew up in the Bible Belt and this song is about how I know in my life that Jesus us up there smiling down on me." Miranda also shared her thoughts on two of the songs she didn't pen for the album. "I'm pissed that I didn't write them," she told the audience. She described the first, "Time to Get a Gun," by Canadian singer/songwriter Fred Eaglesmith, as "one of my favorite songs on the record."

The next, a poignant look at a woman returning the home she once lived in, really struck a chord with the young Texan. "This is one of the most special songs on the album; it touched my heart. It is hard to find a song that makes me cry but I cried when I heard this one. Tonight I'm playing the Ryman and the name of this song is 'The House That Built Me.' I didn't grow up here but in a way I think we all did. I want to dedicate it to my mom and dad." That performance earned her the first of three standing ovations during the night.

After tearing through all 15 songs on 'Revolution,' Miranda cautioned the audience, "Don't go away, we'll be right back!" Minutes later she returned to the stage with her guitar. "Merle Haggard was a tremendous influence on me, so you can't play the Ryman without doing one of his songs," she said, launching into "The Way I Am." She then astounded the audience by singing the Patsy Cline classic 'Crazy' without benefit of a mic, receiving her second standing ovation, and finished with Hank Williams' 'Settin' The Woods on Fire" before the band rejoined her for a few of her earlier hits, capping off the evening with 'Gunpowder and Lead.'"Put those pistols in the air!," she roared, doing so herself with her thumb and index finger, and signaling that Miranda Lambert's musical revolution was underway.