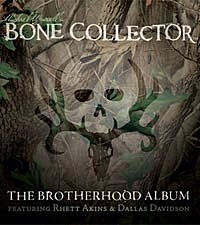 The album was inspired by a moose hunting trip that Rhett and Michael took in Alaska six years ago. "Michael plays guitar, and we were sitting around jamming at the camp one night," Rhett tells The Boot. "We started writing a hunting song for fun. Then we started thinking, man, we can do something with this! We kept talking about it, but nothing happened."

Soon after that excursion, Rhett and Dallas began writing together on a regular basis. "I told Dallas about the album idea, which he loved, but we were so busy writing other songs that it never came about," Rhett explains. "A few years later, Dallas called me and said, 'Are you still thinking about doing that hunting record? I think we need to do it right now!' I went over to his house the next day, and we wrote three songs that afternoon. That's when it really got going."

The 10-track album contains a clever and comedic song selection including 'My Baby Looks Good In Camouflage,' 'Weapons of Bass Destruction,' 'Buck Fever' and 'Duck Blind.' All of the songs were performed by either Rhett or Dallas, who served as the main songwriters on the project with the assistance of co-writers Luke Bryan, Bobby Pinson, Bob Dipiero and Rivers Rutherford.

"We are so proud of this record because we're all such big outdoorsmen," Dallas tells The Boot. "My wife actually said this about the album: 'it will make laugh, make you cry and make you want to kill something!'"

In recent months, Rhett and Dallas have had their fair share of success together on the charts with Joe Nichols' 'Gimme That Girl,' Josh Turner's 'All Over Me,' Brooks & Dunn's 'Put a Girl In It' and Blake Shelton's recent multi-week chart-topper, 'All About Tonight,' which the two co-wrote with Ben Hayslip. Dallas also served as co-writer on Billly Currington's 'That's How Country Boys Roll' and Luke Bryan's 'Rain Is a Good Thing,' while Rhett co-wrote Rodney Atkins' 'Farmer's Daughter' and Colt Ford's 'Chicken and Biscuits.'