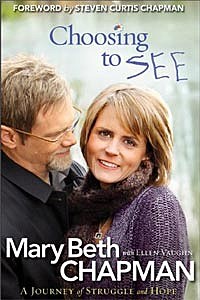 Mary Beth Chapman, wife of gospel music superstar Steven Curtis Chapman, has faced more than her share of struggles over recent years. Already battling bouts of depression, her life took an unexpected -- and tragic -- turn in 2008, when the couple's five-year-old daughter, Maria, lost her life after accidentally being run over by their teenage son. But while most of her pain has been private, with her husband solely in the spotlight, the normally quiet wife and mother is now ready to share her own story as well.

Writing 'Choosing to SEE: A Journey of Struggle and Hope,' Mary Beth candidly admits her faith has been deeply tested, especially in the last few years. "I've told my kids for years that God doesn't make mistakes," she reveals in the book. "Would I believe it now, when my whole world as I knew it came to an end?"

The book, slated for a Sept. 10 release, is Mary Beth's first memoir, although she has co-authored three children's books. She will speak at 13 Women of Faith conferences in 2010, which will also include guest performances by artists such as Mandisa, Nicole C. Mullen and Natalie Grant. Click here for a list of appearances.