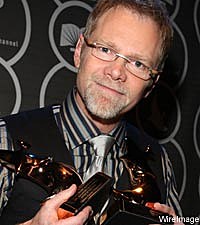 Christian artists Steven Curtis Chapman and TobyMac were two of the biggest winners at the BMI Christian Music Awards, and the stars came out in full force to join in the celebration.

Steven's hit singles 'Yours' and 'Cinderella' made the most-performed list for the year. The latter song, which became all the more poignant after his five-year old daughter, Maria, died in a car accident, was performed by Caleb, a new band featuring the singer's two sons, Caleb and Will Chapman.

BMI writer Jason Walker also contributed two songs to the most-performed list, with his hits 'My Deliverer' by Mandisa and 33Miles' 'One Life to Love.'

TobyMac, along with fellow winner Chris Stevens, took home the trophy for Song of the Year, for TobyMac's single, 'Lose My Soul,' that included Kirk Franklin and Mandisa on vocals.

Also honored during the ceremony was Sparrow Records founder Billy Ray Hearn, who helped shape the careers of Amy Grant, Switchfoot, Steven Curtis Chapman and BeBe & CeCe Winans, among others.