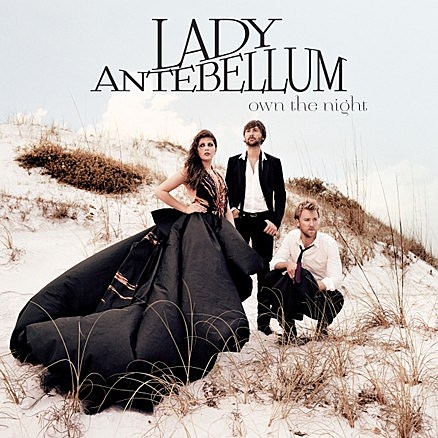 Lady Antebellum have released the cover art and track listing for their upcoming third album, 'Own The Night,' due out September 13. The project is the follow-up to the band's Grammy Award-winning, multi-platinum album, 'Need You Now.'

"We're definitely more in tune with each other musically and personally than ever," says band member Dave Haywood. "It's an exciting place to be. This album was created from the ground up -- we are writing these songs, playing these instruments and creating these arrangements. With 'Own The Night,' more than ever before, we share a real feeling of accomplishment both as a band and as friends."

"Our only hope and expectation for this record is that it will build on the first two," Charles admits. "At the end of the day, we just want our fans to be able to say that we continue to give them solid albums with solid songs they can enjoy from start to finish."

The album's first single 'Just a Kiss' is the band's fast-rising single to date, currently sitting at No. 6 on Billboard's Country Songs chart.

'Own the Night' Track Listing


Pre-Order 'Own The Night'
Filed Under: Lady A
Categories: Albums, Country News
Comments
Leave A Comment
Back To Top
7 Extra-Memorable Garth Brooks Performances