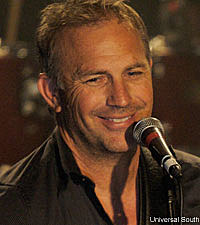 We know him as the Oscar-winning actor and director of such classic movies as 'Dances With Wolves,' 'Field of Dreams,' 'The Bodyguard' and 'Bull Durham.' But did you know that Kevin Costner has been writing and playing music for more than two decades? The dashing 53-year-old and five of his closest friends play rock-infused country under the name Kevin Costner and Modern West – a name introducing itself to country radio for the first time.

The Boot sat down with Costner just hours before his debut on the Grand Ole Opry to talk about another debut, his band's first album, 'Untold Truths.' And the truth he tells us is that he has nothing to prove – he's just finally sharing a beloved hobby.

You've been playing music for 20 years. What finally made you decide to sign a major record deal?

It's been a process. That wasn't my endgame. My endgame was my wife saying, 'I don't know why you don't start playing music again, because you love to do it.' And that was kind of a two year process of her going, 'Why don't you take the trash out?' 'Ah, I'll do it tomorrow.' And after two years of her doing that, I said, 'Well, I'll start writing again with my friend and we'll just start playing.' I didn't decide to go commercial -- that almost came the way acting did, which is I just want to tell stories as an actor, so I started that way. The fact that there was some commercial success, I was grateful for it, but I was also surprised about it. So were my friends who went, 'How did this happen?' It happens when it's the work you like to do. And so it was the same thing -- if I was gonna play live somewhere, I wanted to play my own songs or songs of my friends. And as people began to hear the music, more people said, 'Well I really like that song, I wanna hear a recording of that song.' But it was kinda like, "Take the trash out' again -- I found a hundred reasons to not do it! And about a year ago, Universal heard some of the music and they said, 'We'd like some of these songs.' I said, 'Some?' -- because I was a little hurt by 'some.' [laughs] No, I'm kidding. But it has evolved, so there was not an endgame. I wanna be really clear about that. I didn't care. Look, I'm gonna play the Opry tonight. That was not in my mind three years ago, or in my wife's mind.

Modern West is made up of friends who've been in your life for a long time. It's got to be fun to take such a big step in this journey together.

It's true. These guys are in my house, watching me raise my daughters. I know how they are as people -- they're good examples. They were in the first band I was ever in. And they've gotten jobs on my movies. We're good friends.

I've seen you play live, and I noticed fans singing along to every lyric, so they're obviously not just fans of your movies. You've already developed a musical fan base.

I don't know about that. I really don't. I always feel like it's an opportunity every night. I haven't been that calculated with it, because I know a lot of people come out of the curiosity factor, that relationship I've had for over 20 years with people in the dark, so I don't try to run away from that. I think the worst thing I could do would be to try to divorce myself of what I've done and show up in black leather pants and go, 'I'm a serious musician.' [laughs] That would not only not be who I am, I think that's a fundamental mistake. That's like, 'Now I'm a serious musician. Just forget about what I've done. In fact, if you can't take that out of your mind, I don't wanna play.' That would not be who I am. And I love that we've had this relationship based on the movies. What we all hope for is for our relationships to expand and surprise us. 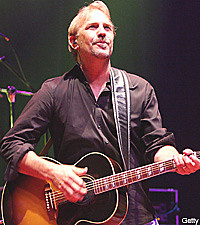 On the flip side, have you found that your movie stardom has caused some people to be skeptical of your music?

Oh, yeah. I'm not naïve. My neck's pretty far out, right? There's a lot of people that just like to chop it up, just because it's the nature of who they are. And then there's a lot of people that say, 'Wait a second, this a time-honored business and if you're gonna play, then we need to feel like it's good.' So there's two kinds of people. The first I dismiss, because who wants to be around people like that anyway? And the second, people like yourself who are obligated because, professionally speaking, you're talking about the music in a serious way. There are a lot of people who play music, and just because you're famous doesn't mean you should automatically be listened to. I understand the advantages of what I have, and I'm very cognizant of the disadvantages. And I can only try to make that that go away within the first minute of playing.

What do you think is harder to break into, acting or music?

They're both really, really hard. I think it's easier to sustain yourself with music than it is as an actor, because as an actor, if you're not selected, there are very few places to go and act. You can go do your little plays, but as a musical artist, even if you're really frustrated, you can still hit the road and play anywhere. You can open your suitcase up and see if people will drop money into it. It's not easier, but you still have the chance to play.

Your debut album, 'Untold Truths,' has been a long time in the making. What would you say is the most personal song of the 12 tracks?

'Ninety Miles an Hour' is a big metaphor for my career. When I said I was gonna be an actor, people went, 'Huh? You're gonna what?' But the point was, I never told anybody I was gonna do that, I just went and did it. I worked as a stage manager for three years for $3.50 an hour, and I never told people, 'I'm an actor.' You don't need to talk about stuff, you just need to do it. And musically speaking, I knew there would be the 'Huh?' and probably a really loud 'Huh?' So instead of talking about it, well let's just go play live, not say anything to anybody and let the music be what it is. And by the time people catch up, if the music has some kind of life above and beyond what we've intended it to have, I'll already be 90 miles an hour down the highway.

I understand the song 'Five Minutes to America' came out of a life-changing experience?

'Fives Minutes to America' is about [Hurricane] Katrina. When I was doing [the movie] 'Mr. Brooks' down in Louisiana, Katrina hit, so a lot of people I watched work for six straight months had lost everything. All of us took Katrina pretty personally. So that song came out of watching people who had lost their homes, but they kept working on the movie because we chose to keep the movie in Louisiana. We really seriously thought about taking the movie somewhere else, but then we thought, 'Well maybe we should stay there. People who lost their homes, maybe they don't have to lose their jobs.' So the song came out of that moment.

'The Sun Will Rise Again' sounds like something Barack Obama could have used for his campaign.

That's so funny that you said that, because I sent it to him! About three weeks ago, I was thinking the ex
act same thing as you. So I sent it to him, and I had no idea that was his crest that he has been using ... That song is just us staring at a landscape of the country, at people who are really hurting. There's got to be some hope.

So do you have a personal relationship with our President-elect?

I don't. I voted for him, and I went and spoke on behalf of him in Colorado about getting out the vote early. My two oldest girls campaigned for him up in New Hampshire. I felt like I should do my part, and so I did. I didn't make a big fanfare out of it, just went up and did it. 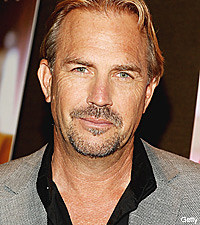 The album is a great mix of rock and country, but one of the countriest songs, if you will, is 'Backyard' – a song about broken down cars left out in the yard.

It's funny -- NASCAR just bought that song. I don't know what they're planning on doing with it, but we got a call and they said, 'We just love this song. Can we put it on our documentary?' That song came out of [my movie] 'Swing Vote.' I think all neighbors hate the people that have their cars out in the yard ... You're thinking, 'This guy's never gonna get this piece of s--- running.' [laughs] But it just needs a fan belt!

Who are some of your musical heroes?

Well, heroes is ... I don't feel that way about it. I think of my musical influences-- Robbie Robertson and Springsteen, and I grew up with Motown. Look, I wish I was Marvin Gaye. I wish I was somebody else ... I love all those people, and when I do a song, it kind of comes out how the album comes out. So my influences were Robbie Robertson, Springsteen, Clapton and the Four Seasons. It's all over the place.

Is there one song you wish you'd written?

In [the movie] 'The Bodyguard,' I identified with Dolly Parton's song ['I Will Always Love You'] as a song I wanted Whitney [Houston] to sing. And Clive Davis ... they kind of went, 'Huh?' I go, 'This is a beautiful song.'

Are you approaching this venture like a brand new artist trying to get your music out there?

I like to perform, but there's a weird pressure. This could go awful. I've always kind of aspired to that moment in my life -- whether it was a sporting moment where I wanted to take the last shot in the game, and people go, 'Why do you do that? You could lose the game.' I always thought about winning the game. And I know things can go badly, but for better or worse, I like to be where it's the most red hot. Even in my acting, I haven't really done sequels. I prefer to be in a movie where I go, I'm not sure if this is gonna work or not, but I'm gonna try it, as opposed to going, 'Oh, this one will really work. I'm gonna do four of them.'

You're making your debut on the Grand Ole Opry tonight. Are you nervous?

Yeah, I'm a little uptight about it.

It's the same for me. I know guys who've started a second family, and sometimes they talk in terms of, 'I didn't realize how much I missed.' And I so thank God that I don't have to say that, because the first time around, I didn't busy myself with my career so much that I missed their growing up. I went to all their plays, all their games ... And doing it the second time, I wondered, 'Can I give it the same energy as the first?' I don't have anything to feel bad about, looking back. I just love their lives.