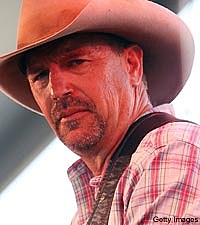 Kevin Costner and his Modern West bandmates are lucky to be alive, after being trapped under the stage during a brutal storm that hit Saturday's Big Valley Jamboree in Alberta, Canada. One fan was killed and dozens more were injured when strong winds caused the main stage to collapse, sending scaffolding and debris flying into the audience.

"We would like to extend our warmest sympathy to the family and friends of Donna Moore, who was killed, as well as the family and friends of all those who were injured," Costner and Modern West write on their MySpace page. "Our prayers go out to you, and we wish with all our hearts that your loved ones' stories from the festival were filled only with fond memories of music and celebration."

The band goes on to thank all of the rescue workers who responded so quickly amidst the chaos, treating those injured at the scene. Modern West's guitar player and road manager were two of the many who were taken to a local hospital.

"We are all aware of how lucky we are to be alive, and we are so thankful to be back with our families today. However, our thoughts will continue to be with the city of Camrose and the fans at the Big Valley Jamboree, and we sincerely hope for another opportunity to share music with you."

Kevin Costner and Modern West were about to take the stage when the storms hit. Billy Currington was on the last song of his set when the wind blew the stage down. The singer suffered a mild concussion but is expected to fully recover.

"The boys and I are very grateful to be home and for life itself," Billy wrote on his Twitter page this morning. "We thank you for your prayers and concern."

Billy's bass player Alex Stevens was trapped underneath the stage for almost a half hour. He underwent surgery to repair a severed artery and nerves in his left arm.

Concertgoer Donna Moore was killed when large speakers flew off the stage, crushing her. Friends say she was a huge country music fan who'd been looking forward to the Jamboree for a long time.

"She was pumped to go to Big Valley," friend Warne Noyce tells the Edmonton Journal. "It makes me sick to my stomach because she was such an awesome lady," he said. "She was hanging out watching music with people she loved."