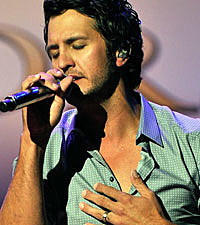 Luke Bryan has penned several of his own hits, including his recent No. 1, "I Don't Want This Night to End." And although he could easily write all of his own songs himself, the country superstar says it's important for him to consider other writers' tunes, as well.

"When it comes down to hearing a great song, or writing a great song and then recording it and it becoming a hit, that's where it all starts for me," Luke explained to The Boot and other reporters at a recent media event. "That's where the enjoyment of this business is so fun. Recording someone else's song is as gratifying as writing your own that's a hit, too, because at the end of the day the fans got something great, and that's what they deserve. They deserve a song that changes their lives, and a song that they can incorporate into their lives."

Luke knows firsthand what it's like to contribute to another artist's album, having penned "Good Directions" for Billy Currington, which went all the way to No. 1 in 2007. "'Good Directions,' I think that put a smile on a lot of people's faces," he notes. "'Country Girl (Shake It for Me)' made a lot of shy country girls that wouldn't maybe have fun, shake it at a concert. 'Drunk On You' does it. When you shake a writer's hand for sending you a great song, and you know that helped change your life, there's nothing more gratifying than that."

Luke is currently headlining his own Dirt Road Diaries tour, and is nominated for four ACM Awards, including the night's biggest honor, Entertainer of the Year. Clearly at the top of his game right now, Luke says none of that is how he measures his success.

"The day you lose any level of enjoyment in this business, I think it would be very sad," he says. "If I could do this all my life, and everything's exciting, then that's a successful career. I don't give a dang whether I've got a dollar in the bank or a million dollars, it won't make a difference to my happiness."