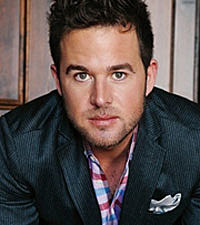 David Nail can definitely attest to the fact that, just like Luke Bryan sings, sometimes "rain is a good thing." His song, "Let It Rain," just keeps racking up awards and accolades, and as one of the writers on the history-making tune, he's honored that the song has touched people in such a big way.

Music Row magazine is the latest to acknowledge the power of "Let It Rain," nominating David for their Breakthrough Songwriter Award in their annual Music Row Awards.

"There are so many great songwriters in this town," says David. "As a singer, I just want to try to honor what the writers create – and as someone who's trying to write songs, I just hope I can stand in their company and not embarrass myself."

"Let It Rain" became the longest-rising chart-topper in history with its 48-week climb to the top, and was named one of Amazon's Top 10 Country Songs of 2011 and certified gold by the RIAA for sales of 500,000 copies. David is currently on his way up the charts again with another gripping tune about the undeniable power of music – "The Sound of a Million Dreams." He definitely recognizes the connection between the two songs and their ability to stir deep emotions in their listeners.

"The thing I love about "Sound Of A Million Dreams" is the way it's all about how powerful songs are ... the way they hold your life for you, so when you hear them, you're right back there," says David. "To me, that was everything we were trying to do with "Let It Rain." How would it be if you were ever in that position: having to admit you'd done something wrong, then facing the consequences? How would that feel? How do you capture that? This nomination makes me feel like ... maybe ... we did."

David is currently wrapping up a tour with Billy Currington, where he's been handing out some dreams of his own, rewarding a pair of lucky fans at each show with seats in the wings onstage. "I realize I can't give away rides on a jet or take someone to Las Vegas for a weekend," says the country star. "But I've been so blessed and so fortunate, especially with the support my fans have given me. I wanted to give something back ... to let them experience what this is that they've made possible for me. So, I figured I'd share the dream with at least a few."