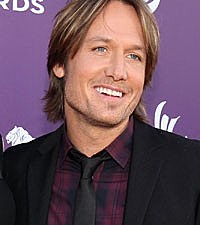 While the rumors continue to swirl that Keith Urban is being courted by "American Idol" to be its newest judge, it has now been confirmed that the country superstar will not return to another reality competition show, "The Voice." Keith was a coach on the Australian version of the show during its inaugural season, alongside Delta Goodrem, Joel Madden and Seal.

"I've been so fortunate to have been a part of 'The Voice.' And as much as I'd love to do it again, it's clear that the recording and promoting of a new album, a tour and other commitments, will keep me from being a part of the second season," the singer says in a statement. "To everyone who sang on the show, I thank you, you've inspired not just me, but countless others."

Nine North, the production company behind "The Voice" Australia, reports that execs are already in talks with "super star musicians" to fill the coaches' big red chairs in 2013. It is not yet clear whether Delta, Joel and Seal are returning.

The American version of "The Voice" is now in its third season and features Blake Shelton, Christina Aguilera, Cee Lo Green and Adam Levine as its sparring coaches.