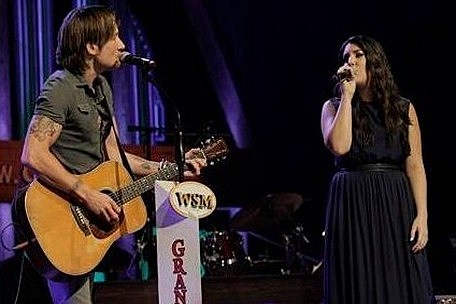 Urban was an early supporter of Harrison's during her run on the show, and frequently praised her unique combination of country, soul and gospel. USA Today reports that he lavished praise on her again Tuesday night, saying, "That's the voice you want to hear at the Opry, and that's the spirit you want to feel."

Harrison performed her debut single, 'All Cried Out,' and followed it up with the hymn 'In the Garden,' which she introduced by saying, "I always told my dad, 'If I ever get to play the Opry, I'm going to do your favorite hymn.'" The 23-year-old singer lost her father in a plane crash when she was 12.

She called Urban back to the stage to accompany her on 'Help Me Make It Through the Night.'

"It was way more than I thought it was going to be," she said as she exited the stage. "I was standing on the circle and trying to look around and kind of take everything in."

Harrison joked that she wanted to kneel down and kiss the circle of oak at center stage, which is a remnant of the Opry's original home at the hallowed Ryman Auditorium. But her dress prevented her from doing that. "If ever I come back, I'm going to not wear a dress and I'm just going to kiss it," she vowed. "I feel like it's not ladylike in a dress."

After the show, Urban posted the photo above to Twitter, writing, "Unbelievably proud of @Kreeharrison & SO honored to share the stage @ her @Opry debut! You brought the house down -KU."