"I'm playing at Penn Station ... I can check this off my bucket list now!" Keith Urban yelled to a sea of surprised rush-hour commuters at the bustling New York City train station Tuesday morning.

The Aussie country superstar performed an impromptu concert at Penn Station, in celebration of the release of his brand-new album, 'Get Closer.' Joking that he wanted to make a set-list full of train songs, "like take the last train to Trenton," he joked, Keith instead kicked things off with an old favorite, 'Days Go By.' (He did, however, change the line "better start livin' right now" to "better start catching your train.") That was followed by the first single from the new CD, 'Put You in a Song,' followed by the heartwarming ballad 'Only You Can Love Me This Way' and then another uptempo fan-favorite, 'Somebody Like You.'

"Thank you for missing your train today!" Keith, clad in all black, yelled to the delighted crowd. "I finally made it to Penn Station. To heck with Madison Square Garden, we're gonna play here. We've got a new record coming out today, and we thought, 'What better way to celebrate than to come and bust at Penn Station?' But you don't need to throw money!"

After the four song set, Keith boarded an Amtrak train to Philadelphia, where he hopped off at the 30th Street Station to deafening cheers, as the "surprise" wasn't such a surprise to some in the City of Brotherly Love. It seems a local radio station found out early about Keith's plans for a mini-concert there and sent their listeners on somewhat of a scavenger hunt to meet him.

Keith's six song show in Philly started again with 'Days Go By,' followed by 'Put You in a Song.' But then it was the fans' turn to determine his set-list, as he honored requests for his No. 1 hits, 'Sweet Thing' and 'Stupid Boy.' Keith also sang a few lines of Elton John's 'Philadelphia Freedom.' "It's either that, or I do a Philly cheese steak song," he joked, before returning to his own catalog with 'Only You Can Love Me This Way' and 'Somebody Like You.'

"Thank you to everyone who came along," Keith beamed at his adoring Philly fans, "and especially to everyone who missed their train and said, 'Eh, we're gonna stay a while!'" 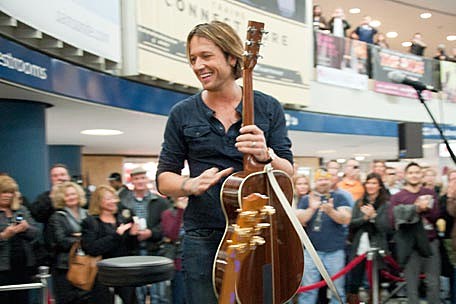 But Keith couldn't miss his own afternoon train back to Manhattan, as he was committed to yet another surprise show -- this one on board the 3:02 PM Philadelphia to New York train. Keith bought out an entire car to host contest winners on the train for a little traveling show and meet-and-greet.

The Boot's cameras were along for the ride from New York to Philly (and back!) and caught up with Keith on the train. We'll bring you our full exclusive video and interview from today's adventure later this week!