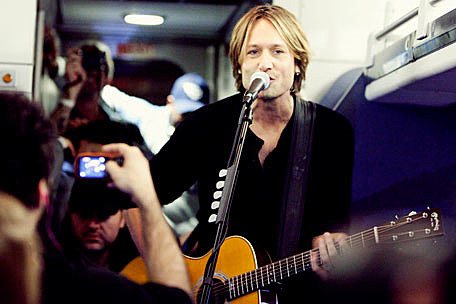 "Please welcome to your private train car, Keith Urban," the conductor announced as the country music superstar confidently strolled down the aisle to a blinding sea of camera flashes.

Clad all in black – long sleeve button down shirt, jeans and boots – Keith graciously shook passengers' hands and smiled for photos before taking an unlikely stage: the aisle of an Amtrak train.

Midway through Philadelphia and New York, the country star picked up his acoustic guitar to serenade excited fan club members and contest winners in an intimate performance, his third surprise concert in a whirlwind day for Keith -- November 16, the release day of his seventh studio album, 'Get Closer.'

Keith started his morning with an unannounced and unpublicized show at New York's Penn Station, followed by a quick train ride to Philadelphia 30th Street Station for another surprise set. The Boot, with our three person camera crew, was invited along for the ride.

Nearing the end of morning rush hour, a stage was set up in the middle of Penn Station's Rotunda. While some curious commuters simply passed by with questioning glances, others hung around to see just what would develop ... and they're sure glad they did.

"We're in New York for some television appearances, and I wanted to play somewhere different," Keith told The Boot of his decision to set up shop at the busiest train station in the U.S. "I'm no stranger playing to the drum machine and odd places, and I thought the train station would be a lot of fun!"

Keith's crew began setting up the stage shortly after 9:00 AM ET in the bustling station. While Amtrak workers knew about the performance, it was a well-kept secret for over a week. In fact, the only pre-publicity came on Twitter just a mere two minutes before Keith took the stage. "Hey New York City, if you're in the Penn Station area right now, come by and see me for a bit," he posted.

At 10:30 AM, a handful of people gathered as one of Keith's roadies tuned his guitar and played a few chords. But the usually bustling train station was unusually calm just before Keith made his way to the stage. Only a few dozen people approached at first. But, word spread lightning fast. Once the strumming of his guitar and vocals were heard in the speakers, the makeshift stage at Penn Station was bombarded by wide-eyed fans. We witnessed several husbands excitedly calling their wives to brag about this treat they stumbled upon on their way to work.

"I just bought a disposable camera to take photos for my wife. She loves him!" one commuter told us.

"Make sure you get good pictures, and I'll email them to my wife. She's a huge fan of his, too," added his co-worker. 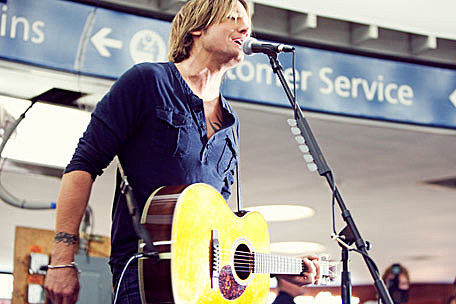 Keith began his first performance of the day with the upbeat 'Days Go By,' as excited onlookers sang back every word to him. "I finally made it to Penn Station. To heck with Madison Square Garden, we're going to play here!" the singer yelled. "We've got a new record coming out today and we thought, 'What better way to celebrate than to come and bust at Penn Station?' But you don't need to throw money!"

And the jokes kept coming ....

"We thought about doing a bunch of train songs today. 'Take the Last Train to Trenton,' or something like that," Keith said with a smile.

Train humor aside, he did substitute some train-centric lyrics. On 'Days Go By' he sang, "You better start livin' or running to catch your train." That rousing performance was followed by Keith's current single, 'Put You in a Song,' the heartwarming ballad, 'Only You Can Love Me This Way,' and then another uptempo fan-favorite, 'Somebody Like You.'

The now packed crowd was sorry to see him go, but Keith had much more up his sleeve as the day wore on.

Thirty-minutes after his Penn Station performance, Keith let Philly fans know via Twitter that he'd be visiting them, as well. "Philly ... I'm headed your way next! Meet me at 30th Street Station (Amtrak) on Market Street at 1PM today. See you there," he tweeted.

Keith entered the North Waiting Area Room at 30th Street Station to deafening cheers, as the "surprise" wasn't such a surprise to some in the City of Brotherly Love. Between his day-of social media promotion and radio station announcements, hundreds of fans flocked to the train station excited to hear their favorite country artist close up.

Katelynn from Spring City, Penn., learned of Keith's performance on her local radio station and drove an hour with her aunt, who's a huge fan.

"I've liked Keith since 1999, if not longer. The first song I heard of his was 'Where the Blacktop Ends,' and he's hooked me ever since," explained Katelynn's Aunt Connie from Douglassville, Penn. 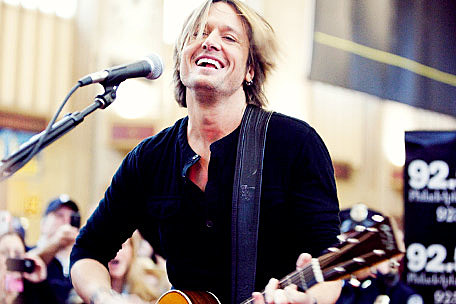 Shortly before 2:00 PM, Keith took the Philly stage to continued screams. Fans came out in flocks, many wearing Keith Urban tour T-shirts. More publicized than his New York performance, fans anxiously waited for his train from New York to arrive and once it did, sang along word for word on every song.

"You guys are in a singing mood I can tell," says Keith as he addressed the crowd for the first time. After he performed the fan requested 'Sweet Thing,' he expressed his appreciation to the audience. "Thank you to everybody who came a long way to be here. Especially thank you to everybody who just missed their train and said, 'Eh, its fine. We're gonna stay a while.'"

After his Pennsylvania performance, Keith had a few media interviews and a quick snack -- harvest cheddar SunChips ("breakfast of champions," he laughed) -- before he boarded the 3:02 PM train back to New York. It was on the return train trip in the dining car that The Boot got to sit down one-on-one with Keith to chat about the album, relationships and writing a song on Waylon Jennings' guitar.

When asked if the excitement of record release day ever wears off, Keith said he still holds the same thrill as his first album. "More so because we're on a train today," he told us.

Train conductor announcements and Keith's brand-new music could be heard over the speakers of the car in front of us as fans waited anxiously for his private mini-concert onboard the Acela. With a jam-packed day of train performances, we asked Keith what was running through his mind during his surprise concerts.

"It's a great feeling. It doesn't matter how many people are out there -- if it's 5 or 50,000. It's just people connecting and being in the moment. That's what it's all about," he answered.

On the release day of 'Get Closer,' Keith explained that his albums have always been used as snapshots of where he is in his life.

And where he is, as echoed in several tracks of 'Get Closer,' is a place of much joy and comfort. With a blissfully happy home life with his wife, actress Nicole Kidman, and their daughter, Sunday Rose, Keith explained that he's now in a place where he embraces intimacy instead of running away from love --something he's done a lot in the past.

"My own personal experience has been one of a realization of what loving means. Anybody who has loved someone and had their heart broken, they know how hard it is to love again, if they can even do it at all," Keith said. "It's very difficult; it can take a long time if it ever happens." 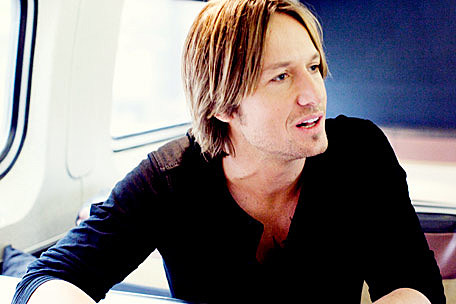 "I look back at my life and up to meeting Nic, I think I was just scared. Scared of someone hurting me," he admitted. "I was stuck in a rut subconsciously but consciously not aware of it at all. It really took meeting her for me to start coming to a realization of the courage it takes to love. Do I really have that? This record addresses a bit of that."

As far as his advice on having a healthy relationship, Keith says to be patient.

"We've all got our own journey, that's the first thing. It's not about a time limit."

Despite writing hit after chart-topping hit over the years, Keith says there isn't one song that means more to him now than when first written.

"It's really like finding a book that you love and you read it again years later. It's the same book, it hasn't changed, but as the reader we've changed, so it takes on a whole new life," explains Keith. "I find that these songs have absolutely done that. I can't singularly point one out, but a lot of them have deepened exponentially for me."

The writing process for Keith varies, whether he starts with a melody or a lyric in mind. A few times, like in the case of 'Georgia Woods' on his new album, the idea for the track came from a guitar riff off of Waylon Jennings' guitar.

"Songs are elusive. I have Waylon Jennings' famous telecaster guitar, and I wanted to write with it. I thought, 'This guitar's full of mojo, it's gotta have some songs in it.' I took it to a writing session, and the riff for the song came out on the guitar and the melody comes and the story comes," he recalls. "Before I know it, we're in the midst of writing this really sexy, simmering, love unfolding in the woods of Georgia kind of song. I'm really happy about how it turned out."

Having played live his whole life, whether in bands or solo, Keith confesses playing in a live setting and interacting with the audience is something that has always inspired him. We couldn't imagine a more perfect way to end the day then joining him for his last performance aboard the Amtrak train back to Manhattan.

With a 20-minute set to a car full of fans and contest winners, Keith took to the train's aisle and began with brief covers of The Monkees' 'Last Train to Clarksville' and Johnny Cash's 'Folsom Prison Blues.' (Finally, a few train-inspired tracks!)

"What do you guys wanna hear?" he asked the train car to screams of fan requests.

Despite the close proximity to Keith, contest winners were relatively tame until it came to shouting out their song suggestions. 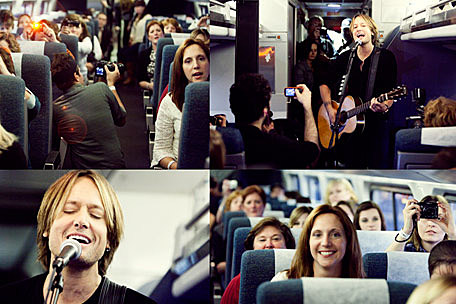 After starting in the wrong key, Keith laughed and apologized before he began 'I Told You So,' while the car sang along word for word. Fan favorite 'You Look Good In My Shirt' followed suit in another sing-along.

"Take your shirt off!" screamed one fan, to which Keith replied, "It's not that kind of a train."

Despite many fans wishes, Keith kept his shirt on to play the rest of his set, which included 'Raining on Sunday' and the brand-new 'You Gonna Fly,' in his live debut of the song.

"I want to thank everybody not just for being here today, but also spreading so much of the good love and good word about our music and what we're doing, dragging people to concerts and turning people onto country music -- it means a lot."

With a packed crowd at Penn Station and 30th Street Station, as well as onboard the two trains, Keith gained many new fans while giving a memorable treat to many longtime fans. After he surprised unsuspecting commuters Tuesday, travelers are sure to pay close attention to street performers. After all, who knows who you might see playing at your local train station?