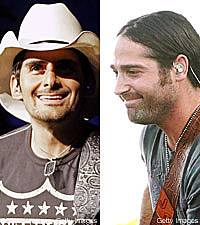 Each night after Brad Paisley's H2O World tour stop comes to an end, the party is just beginning in a room backstage. Brad along with his band, Darius Rucker, and occasionally Papa Paisley, Doug, all gather at around 1:00 AM to play a friendly yet competitive game of poker.

"I think I'm [a pretty good poker player]; I could be wrong. Some nights I do better than others," Brad recently told Lon Helton on his Country Countdown U.S.A. radio program. "My steel player does well, and my fiddle player does well."

Not everyone on the tour is as eager to risk losing their night's pay though. "Justin Moore's been invited but he says that he doesn't know how [to play] which is even better," Brad says. "Josh [Thompson], Easton [Corbin] and Steel Magnolia, I haven't actually run into them that late [to invite them to play]."

Josh, however, admits that it's no coincidence he can't be found at that time each night. "I think that it's probably no mystery that there's a discrepancy in the bank accounts," Josh tells The Boot with laughter. "It would be like me bringing a .22 caliber to pretty much a whole war with machine guns and tanks and cannons ... why would I do that?" [laughs]

The poker game has been put on hold in the recent weeks as the tour has taken some time off from the road. The trek is set to resume this week in Chicago and Toronto, which has Josh excited to get back on the bus.

"This will be my first time in Canada playing ever," he notes. "I've been in Canada ice-fishing before, but never for a show. This tour and the headlining shows in-between dates are going well. I sold out my first show recently, and the crowds are getting bigger every night and they're singing all the words. The Paisley tour is a great, big help with that."

Brad just came off his two-week run at No. 1 with his latest hit, 'Water,' while Josh is quickly approaching the Top 20 with his latest single, 'Way Out Here,' from his album of the same name.