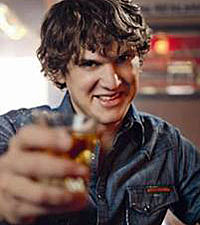 If the world is going to end -- as the Mayans predicted it will-- on Dec. 21, 2012, then country newcomer Jon Pardi would rather be safe than sorry.

And by sorry, of course, we mean missing his last chance to party. Therefore, the singer-songwriter will play an "end of the world" bash that night at Chicago's Joe's Bar, to conclude what he's calling 'The Year of the Pardi.'

"Joe's Bar is one of my favorite clubs to play and if the world really is going to end, I can't think of a better place to spend what might be our last night on earth," Jon explains. "But if we survive, we'll party like there's no tomorrow, all night long!"

Leading up to this apocalyptic bash, Jon and his bandmates are staring in a series of webisodes that will take viewers behind-the-scenes of their performances as they promote "Missin' You Crazy," his debut single. The group will also compete against one another in "crazy challenges" and travel to radio stations on the "Pardi Bus."

For Jon, the rest of 2012 also includes tour dates with Eric Church, Miranda Lambert and Dierks Bentley. Get a full list of his tour dates here.

Watch Jon's 'The Year of the Pardi' Launch Video