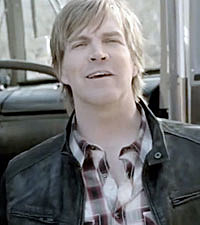 Jack Ingram tackles Texas stereotypes in a Super Bowl commercial for Lone Star State grocer, HEB. "When I'm on tour across the country, you'd be amazed what I hear about my home state," Jack says at the beginning of the clip, which depicts Texan myths from riding horses to work to barbecuing breakfast. (Watch the ad below.) The commercial kicks off HEB's True Texan contest that runs throughout February. Get more info here.

Taylor Swift takes fans behind-the-scenes of her "I Knew You Were Trouble" video in a series of clips released this week. "The song sounds different from anything I've done before, so I thought, why not make this video unlike anything we've done before?" says the 23-year-old. Hear from the clip's 'bad boy,' played by Broadway actor Reeve Carney, and check out the Southern California locales in the video on Chicago's US99.5 radio site.

Justin Moore hits the road on his first headlining tour, dubbed Outlaws Like Me, on March 14. Dustin Lynch and Jon Pardi will open the trek, which currently has 12 dates on the books. Justin promises to preview new music from his upcoming album, expected out later this year, during the tour. See a list of dates here.

"Moonshine Road," Kix Brooks' latest single, was inspired by the singer-songwriter's Louisiana roots. "There was this old roadhouse where we got in fights, we picked up girls, we drank beer, there was always trouble," he tells Radio.com. "You knew something was going to happen when you went down there." The tune, which he co-wrote with Leslie Satcher, also uses a familiar "groove" that Kix admits to including in a lot of his songs, saying, "It's just that swampy thing, and that's where I come from." [CBS Local]

More good news for Randy Houser, who celebrates his first Recording Industry Association of America gold certified single with his first-ever No. 1 tune, "How Country Feels." The song has sold more than 500,000 downloads.

Gretchen Wilson's latest single "Still Rollin'" is a switch from the traditional country tunes she built her career on. The rock tune will appear on her upcoming album, Right on Time, a 12-song project due out on April 2. The "Redneck Woman" will also release an album of '70s rock covers, Under the Covers, on May 28, followed by a Christmas album this fall. [Taste of Country]

John Denver: The Music Is You is a 16-song tribute to the late John Denver, celebrating 40 years of hits and raising funds in his name for the Wilderness Society. Emmylou Harris covers "Take Me Home, Country Roads" with Brandi Carlile, Mary Chapin Carpenter sings "I Guess He'd Rather Be in Colorado," and Lucinda Williams can be heard on "This Old Guitar." The project is due out April 2. [CMTT]