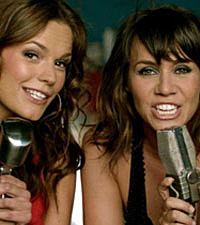 Miss Willie Brown's Kacey Buckley and Amanda Watkins, who are currently on the road with Frankie Ballard and Jon Pardi on the Tie One On tour, are used to being the only ladies on the road. The duo, who toured with Dierks Bentley and Josh Thompson last year, are applying the lessons they learned from that run to their current trek.

"The one thing we learned from Dierks is being kind and being humble to the other musicians and making sure everyone has enough time to soundcheck, and everything," Kacey tells The Boot. "Just realizing that you're not the only band out there and keeping it a good time, and making it about music. Sometimes after the shows, we'd go back on his bus and play music with everybody, and everybody would jam on old Waylon Jennings songs and Keith Whitley songs. Sometimes we'd hang out and listen to music and everybody would join down in the basement of wherever we just played. It's its about community."

Tie One On gives one a certain image in their mind, and while the girls weren't behind it, they definitely support it.

"We didn't name the tour, but there's some irony to it," Kacey explains. "About two months ago, Amanda started working on this song about tying one on, and then we got this tour offer. It's a Jon Pardi thing, I think. He just likes to party. It's his gig. We didn't have anything to do with the name, but we will represent it properly. [laughs]"

While they've never hung out with either of their tourmates, the pair are looking forward to "making friends." Their next stop is tomorrow (Oct. 11) in Folsom, Calif. Find more info about the tour here.

Watch Miss Willie Brown's 'You're All That Matters to Me' Video