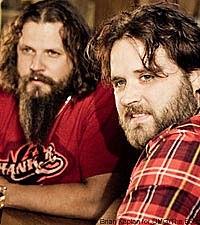 Jamey Johnson and Randy Houser, already touring together as part of CMT on Tour, are proving they want their shows to be about more than just a good time. Partnering with the USO, the country stars are giving fans the opportunity to fill out postcards thanking troops for their service, and committing to volunteering in their own community. In addition, memorabilia from both Jamey and Randy will be auctioned off on CMTauctions.com, with proceeds benefiting the USO.

"Those guys in the field need some emotional connection to home, and I think this project will bring a little bit of home to them," Jamey tells CMT. "Regardless what your political beliefs are about the war, you have to respect the fact that another human being in your country is willing to give their life for your freedom."

Randy agrees, saying, "Any way that we, as entertainers, can provide comic relief, music relief or any kind of support to our troops is worth making because of the effort they make for us every day."

The longtime friends are nominated for two awards each at the upcoming CMA Awards, including New Artist of the Year.