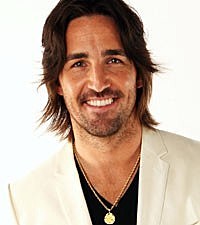 Jake Owen had quite a year in 2012. The singer married his longtime girlfriend, Lacey, in an intimate beachside ceremony in May, and the couple welcomed their daughter, Olive Pearl, into the world in November. While it may be difficult for some people to adjust to two life-changing events in one year, the singer says it has only made him better.

"I don't really feel like I've changed as a person too much, but I change my views on things," Jake tells The Boot. "There are things I want to be better at now. There are things I want to do to be a better human being and a better father. But as far as completely changing me as a person, I haven't really changed. I just look at things a little bit differently, and work harder to set a better example, not only for my wife and child, but also for the people around me, so they can see me as a serious father, and not someone who is taking having a child for granted. It's a big deal to me."

The Florida native is even more appreciative of family since his father, Steve, was diagnosed with cancer in January. "He's OK," Jake says. "It's really tough on him. We just try to keep his hopes and his spirits up. We all try to do that, so he gets bombarded every day with phone calls, but that's good. We have to be tough on him, but he's a strong guy. I think he's handling it well."

Jake's dad, who is being treated in Minnesota, has received plenty of well wishes from the country star's fans. "I think he was flattered by how many people actually really cared about what he is going through," Jake notes. "I didn't do it to just put it out there or exploit what he's going through, but now that this has all happened, I realize how many people deal with this and I want everyone to know that I understand what they're going through. It wasn't just about my dad ... If anything, I think it made my dad feel great. It's flattering for him that so many people out there were saying prayers for him and writing stories about him. It meant a lot to him."

The illness also gave the "Anywhere With You" singer a deeper empathy for others who have family members dealing with a severe illness. "For anybody else out there going through this, my heart's with you," says Jake. "You hear about people your whole life, 'So-and-so has cancer,' and you're like, 'Wow, that's too bad,' and then most people tend to go about their day. But when someone tells you that it's your father or it's your family, that doesn't tend to go away."

Jake is currently on the road with Jason Aldean's Night Train tour, which will head to Texas, Wisconsin and Minnesota later this month. See a list of his upcoming shows here.