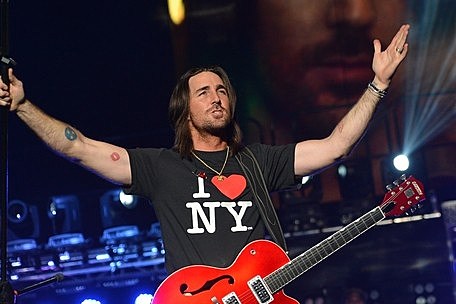 Breakout country star Jake Owen has been in the studio working on a new album, and he hopes to release it by the end of 2013. In a new interview, the singer says he's looking at a December release date.

"I'm in the middle of almost wrapping it up, actually," Owen tells Billboard. "I've recorded about eight or 12 songs that are great. It's just feel-good, kind of the same thing I do, man. Just good-time, good-feeling songs. That's the best way to put it."

Owen has already been playing some of the new songs live, including 'Beachin'' and 'Days of Gold,' which he says is a contender to be the album's title song. He hopes to release a single in July, and he says he's not worried about trying to follow up the success he's already had.

"As much pressure as it might seem like, it also takes a lot of pressure off," he relates. "Radio stations know if you've had three No. 1 [singles] in a row you've got some momentum going and people want to hear what's next."

He adds, "I've got to tell you it feels so good now to be in this place in my life, where people are paying attention."

Owen is taking the same approach to the new material that served him so well on his breakthrough third album, 'Barefoot Blue Jean Night,' which reached No. 1. "I wrote everything on my first two albums, and on 'Barefoot' I pretty much chose a lot of stuff I liked, whether I wrote it or not, and that's what I'm doing on this (new) record," he says, adding that he's been lucky to receive great material.

"I'm not at the point where I care anymore if I wrote 'em or not," he adds. "It's really about the song, not who writes it."

Filed Under: Jake Owen, JakeOwen
Categories: Country News
Comments
Leave A Comment
Back To Top
How Well Do You Know Tim McGraw? Take the Quiz!