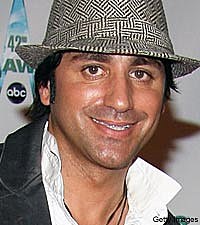 Steve Azar and PGA tour player DJ Trahan, along with the rest of their six-person team, took top honors yesterday (April 12) at the Hootie & the Blowfish 16th Annual Monday After the Masters Celebrity Pro-Am Golf Tournament in Myrtle Beach, S.C.

Steve and his team members came in with a score of 18-under-par. Placing second in the tournament was Hootie drummer Jim 'Soni' Sonefeld who was paired with pro golfer Dustin Johnson. In third place was former Hootie frontman, Darius Rucker with pro Jim Furyk. Fourth place went to Colt Ford who was paired with Tommy Gainey. All three teams boasted 17-under-par scores.

"This year's event has been phenomenal, and we're so thankful to all of our sponsors, friends, pros, and supporters for making this our favorite golf event each year," Darius says.

The 2010 Hootie & the Blowfish Monday After the Masters Celebrity Pro-Am Golf Tournament kicked off Sunday night with a live auction and pairings party at the House of Blues. Each year, the live auction raises money for the Hootie & the Blowfish Foundation which supports the South Carolina Junior Golf Foundation and the educational needs of children in South Carolina.

This year was the fifth consecutive sellout crowd of 6,000 fans who packed the Dye Club at Barefoot Resort & Golf in North Myrtle Beach, S.C. In May, the Golf Channel will broadcast highlights of the tournament as well as interviews with the stars in attendance.