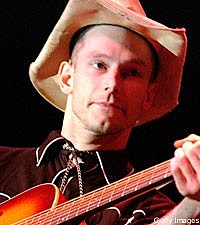 Blurring the lines between country, rock and punk is all in a day's -- or late night's -- work for Hank Williams III. And the grandson of Hank Williams and the son of Hank Williams Jr., Hank III couldn't be more far removed from mainstream country if he played cello in a symphony orchestra. He's also not likely to win fans of modern country music over with some of his more honest observations about today's country.

"Nowadays, country music's basically pop -- the poppiest I'll ever get is singing with a lady," Hank III tells the Louisville Courier-Journal. "It's all so shallow and computerized. Any of these Big & Riches, they're being told what to play. There's no creativity on their own. I couldn't take the easy road. I've always been about standing on your own two feet."

Hank III also offers his thoughts on what his grandpa would think about what's being played on the radio these days, saying, "The best music out there isn't on the radio. If Hank Williams turned on the radio today, he'd be turning it from FM to AM."

Although he signed with Curb Records, the same label that's been home to his dad for the past three decades, Hank III believes that was a mistake. After feuding with them for years, he's got one more album to record in order to fulfill his contract, and is likely to sign with an independent label once that happens.

"They're just holding me back," he says of the same record label that Tim McGraw has been outspoken about in the past. "I don't want to have to talk to a lawyer if I want to jam with someone or if I want to sing on someone's album."

Hank III and his punk/metal/country band Assjack (try saying that on country radio!) will release an album this summer. In concerts he's known to play three distinct sets: country, "hellbilly" and rock. But when it comes to writing songs, he takes the advice once given to him by another country legend.

"Johnny Cash once told me, 'Write songs for yourself; don't write 'em for anybody else.'"

Incidentally, Hank III's half-sister, Holly Williams, releases her latest album, 'Here With Me,' tomorrow (June 16). Look for our in-depth interview with her on The Boot this week.