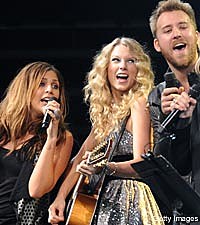 The Recording Academy has announced that the CMA Entertainer of the Year and Billboard's Artist of the Year, Taylor Swift, will be joining Beyonce and the Black Eyed Peas in performing at the 52nd Annual Grammy Awards. Taylor -- who was also just selected entertainer of the year by the Associated Press -- is nominated for eight Grammys. The 20-year-old singing sensation is second only to Beyonce, who has ten Grammy nods this year.

Also representing country on music's biggest night will be Lady Antebellum, the twice-nominated trio who will perform on the Grammy telecast, as well.

The Grammy Awards will be televised live on CBS on Jan. 31.